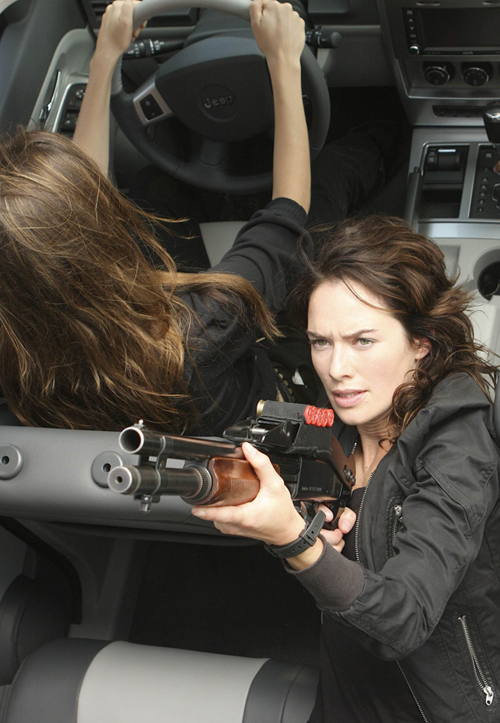 This Week’s Operation: “Goodbye To All That”

Mission Briefing
From Fox: John and Derek infiltrate a military academy in order to protect an integral member of the future resistance. Meanwhile, Weaver’s first assignment for Ellison takes an interesting turn of events when he discovers a specter from his own past.

Damage Analysis
“Goodbye To All That” marks the third episode in a row that has taken a cue from [[[Lost]]] with an emphasis on a character-centric rather than plot-driven episode. Not to say that this episode was poor necessarily, but once again, the driving story of Season Two is at a bit of a loss. There are some threads being tied together to weave some semblance of an underlying threat, such as Ellison’s building momentum and the bloody writing on the basement wall in Casa de Connor.

It’s the latter of those two that informs the main plot of this episode. A Terminator comes to town looking for Martin Bedell, a man who will grow up to become a key resistance fighter and personal ally of John’s. There are two potential targets, and the Connors divide themselves on gender lines. John and Derek pursue the Bedell currently at a military academy, which they learn of by deciphering one of the bloody messages on the wall. They then infiltrate the military school, posing as a student and as an instructor respectively. Right off the bat, there’s something inherently off about John and Derek being able to join the military school’s ranks so readily. You’d like to think that their application process for accepting students is a bit more rigorous than “Well, he’s a good kid, let’s give him a free three week trial,” but that’s what happens for John. And in Derek’s case, not much more than a “Hey, you look tough, we got an open instructor slot for a week and it’s all yours!” Kind of ridiculous.

The episode’s character-centric stuff stems from Derek, giving Brian Austin Green his first real moments to shine as an actor this season. He gets a lot of stuff to play with this round as certain sights and moments trigger memories of his from the future. There’s one particular moment that was very touching: Derek pauses in the woods while scoping out the military academy, and locks eyes with a deer. It was nice to think for a bit that the writers cared about this character enough to give this future man a moment where he’s out in nature, realizing just how much he’s lost in the war yet to come. Of course, the writers couldn’t maintain something that subtle, and later bring up that exact deer moment to say that Derek and his brother Kyle killed a deer once. Alas, such is [[[The Sarah Connor Chronicles]]]. 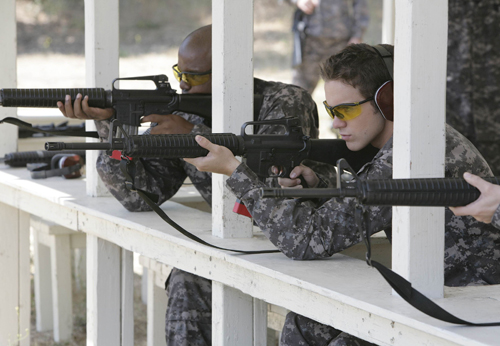 If nothing else, this episode proves exactly why Terminators went back in time to kill John as a teenager: adolescents are morons. There’s a point where John throws himself in the path of the Terminator to prevent it from killing Bedell, as if somehow his role as leader of mankind isn’t integral to their future survival. In his defense, you do get a sense of how much pressure is on this kid (if you didn’t already), when Derek tells him why Bedell is so important: in the future, he sacrifices his own life to save John’s eventual father and even John himself. “We all die for you,” he reminds him. Hard to hear that when you’re supposed to be flunking probability and statistics instead of running from murdering machines all day.

While we’re in the mood, let’s mark two episodes in a row now that Sarah sits out on the main plot. She and Cameron rescue young Marty Bedell from an assassination attempt, and then take him back to their hideaway. Sarah spends the remainder of the episode pining over her lost days of motherhood, and she tries to make up for it by helping Marty out on a book report. Honestly, Linda Hamilton’s Connor wouldn’t be caught dead reading [[[Wizard of Oz]]] in a million years. She’d sooner crush John’s skull with her bare hands.

James Ellison’s sideplot finally intersects with the Connors, as he investigates the events at Serano Point from the season’s second episode. That in itself sums up the problem with the Weaver-Ellison plot. You introduce a T-1000 into the show, but rather than have her be the focal point, she’s scattered in maybe three scenes per episode. The storyline is three episodes behind the “main” plot, which is barely definable itself. They drop a huge bomb in this installment, informing the viewer that Serano Point is to go online in August 2009 — clearly, the new date of Judgment Day. Still, without enough focus on this story, viewers are going to lose their patience with the show. 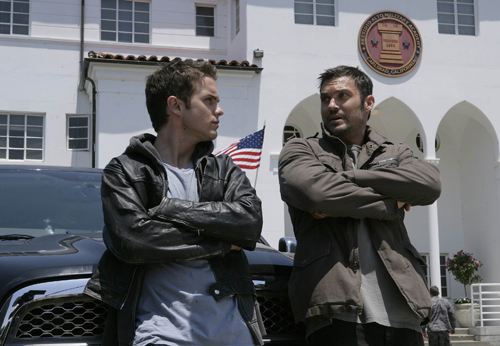 And that’s the numero uno problem when all’s said and done. As was reported this week, ratings are way down for [[[Terminator]]] this year. The top viewer ratings are less than any from last season, and the drop off between episodes is astounding. It’d be easy to blame Fox for not marketing the show well, but c’mon… it’s Terminator! The brand should market itself! No, it’s a deeper problem than poor marketing: the show itself has always struggled to find quality, but has never quite succeeded. There are solid episodes, even awesome episodes. Take this one for instance: several scenes in the future, which are always awesome, but how can Fox justify funding this show’s special effects when they don’t have an audience? There just isn’t a sense that the show knows exactly how it’s getting to Judgment Day, and if it does, it’s not being very clear about it. In the end, if Sarah Connor is terminated, the blame will rest squarely on the poor creative direction of the show.

Solid performances from Brian Austin Green and Thomas Dekker, as well as guest star David Cheany as Martin Bedell, make this a very enjoyable episode. But the lack of clear direction is getting incredibly frustrating. If the ratings dropped for this one, we might be saying “Goodbye To All That” sooner than we’d hoped.

If Terminator returns from its two week hiatus, the sixth episode will be called “Brothers of Nablus.” Previews show Derek making out with someone (not Donna from the ‘hills, sadly) while John is “on the case” tracking SkyNet. Meanwhile, Cameron and a red-headed femmebot kick each other’s faces in on an elevator, but are courteous enough to take a comedic pause when more patrons step on the elevator with them.