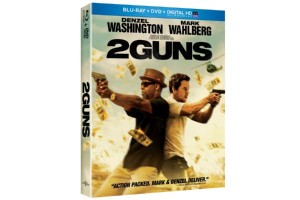 The buddy picture was a staple of the 1970s and 1980s, possibly dating back to Butch Cassidy and the Sundance Kid but it’s been largely missing from more recent Hollywood fare. As a result, you have to given Universal Studios credit for recognizing the somewhat fresh approach in the Boom! Studios graphic novel 2Guns. Steve Grant paired two men in a drug story that felt familiar but with every action, things were never what they appeared, freshening the entire concept. Add in the charismatic Denzel Washington and Mark Wahlberg, stir, and you have a crime story worth taking a look.

Out now on Blu-ray from Universal Home Entertainment, the film starts off with a robbery and never really slows down. Washington is Robert Trench, Bobby T, and Wahlberg is Michael Stigman, Stig, paired up to rob Mexican criminal drug lord  Papi Greco (Edward James Olmos) of $3 million in cash. Neither is ware that both men are phonies with Bobby working undercover for the DEA while Stig is a member of Naval Intelligence, hoping to obtain the money to fund their cover operations.

Instead, they wind up robbing a bank in Tres Cruces, New Mexico and walking away with over $40 million in kickbacks paid by the drug lords to the CIA. The agency dispatches Earl (Bill Paxton) to recover the money and he cuts a bloody swath as he nears the truth and the cash. Along the way, the friends discover the truth about one another but then the revelations keep on coming as Bobby realizes he’s been set up by his sometime lover Deb (Paula Patton) and Stig discovers the Navy would rather sweep the scandal under the rug than do the honorable thing.

And chasing them all is Papi, who wants revenge for being robbed and humiliated by the pair. Olmos looks like he’s having the most fun although the two lead performers also banter nicely. The problem with the film is that Blake Masters’ screenplay never properly develops a single character so they feel sketchy. We don’t know what drives Bobby to spend three years undercover and what he’s had to give up or why Stig thinks it’s okay to use drug money for government purposes.

Under Baltasar Kormakur’s direction, we get lots of nice scenes set in New Orleans, and New Mexico and some inventive action sequences but everything feels like it’s on the surface. It’s a cleverly constructed plot and no one seems interested in exploring the larger themes or motivations. Maybe this is why it was aimed at late summer, when most audiences stop thinking and accept whatever’s on the screen.

Watching at home, you stop and realize how little of the story holds up under scrutiny, especially the whole Deb betrays Bobby sub-plot. The disc includes several extended and deleted scenes, none of which add anything to a deeper understanding of the story. Koramakur and producer Adam Siegel provide a standard commentary that shows no one seemed interested in making this a more complex tale. The movie comes with “Undercover and into Action”,  a fairly by the number Making Of featurette.