3-D TV and Gaming: Apple To The Rescue? 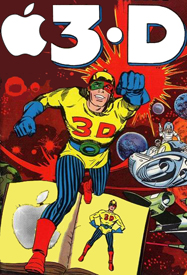 So far, sales of 3-D TVs haven’t exactly set the world on fire. Maybe… just maybe… that might change. Maybe.

Our friends at Apple have told the London Daily Telegraph they’re working on new 3-D technology that would function without special glasses. Oh, and it handles holographic images as well.

Apple’s patent reads: “An exceptional aspect of the invention is that it can produce viewing experiences that are virtuallyindistinguishable from viewing a true hologram. Such a ‘pseudo-holographic’
image is a direct result of the ability to track and respond to observer movements.”

OK. Wow. They didn’t say when this technology will become available, but Apple hopes to apply it to computers, to televisions and to movie screens.

Leander Kahney, who wrote a book called The Cult of Mac, noted “As well as
watching 3-D movies, Apple’s system would have a ton of applications in science, engineering, design and education, while 3-D iPhones and iPads would be killer. It’s easy to imagine things like amazing 3-D textbooks and instructional videos. 3-D gaming on an iPad would be an incredibly immersive gaming experience.”