Dec 27th 2010 – When the dust settled and more than 4 million unique visitors had cast their votes for their favorite original online productions at www.podcastawards.com, Canadian audio drama production company Decoder Ring Theatre emerged with a win in the Culture/Arts category for their ongoing releases of adventure and mystery programs in the tradition of the Golden Age of Radio.

The Decoder Ring Theatre podcast took to the “air” in October of 2005, and has offered two new, full-length, full-cast audio drama programs each month to listeners worldwide ever since. Presenting the two-fisted pulp exploits of the masked protectors of 1930’s Toronto in The Red Panda Adventures, the hard-boiled private eye casebook of Black Jack Justice and some anthology programming, the shows have attracted a large, international audience, drawn nearly 2 million direct downloads and spawned a series of tie-in adventure novels written in the spirit of the “mystery man” pulp magazines like The Shadow and The Spider.

“Our audience is largely American,” says head writer Gregg Taylor “and it has always delighted me to have this passionate audience following the exploits of a Canadian superhero. The fact that they were driven to push us over the top in the voting for the Podcast Award means a great deal. It means a lot of exposure and that can only help. Besides, it was our third nomination and I was getting sick of having our hat handed to us by the This American Life podcast.” 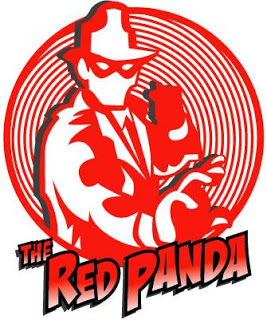 It has been a banner year for Decoder Ring Theatre, having also won the juried Parsec Award for Audio Drama in September. The Parsec Awards recognize excellence in Speculative Fiction Podcasting and are awarded annually at DragonCon in Atlanta, GA.

More information about Decoder Ring Theatre may be found at the company’s website, http://www.decoderringtheatre.com/

Bruce Rosenberger, Tommy Hancock and Art Sippo join Ric Croxton of Book Cave fame and talk to Joe Sergi about his novel Sky Girl. Be sure and listen toward the end of the show when Joe offers his books in a contest. It’s simple, just send Ric (rjcroxton1@yahoo.com) your best superheroine name for a chance to win a book.  Joe and Ric will pick the best names and those winners will receive a copy of Joe’s SKYGIRL AND THE SUPER HEROIC LEGACY or another of Joe’s books.  Listen at http://thebookcave.libsyn.com/ric-s-comics-episode-45-joe-sergi-s-sky-girl for some pulpy comic goodness!

MYSTERY MEN (AND WOMEN) ON THE BOOK CAVE

12/23/10 ON THE BOOK CAVE!! The Book Cave Episode 106: Mystery Men (and Women) Check out ALL PULP’S official podcast, THE BOOK CAVE here-
http://thebookcave.libsyn.com/

Ron Fortier and David Boop join Art and Ric to discuss their book, Mystery Men (and Women).
And Tune in this week for Ric’s and Art’s Year End Round Up on THE BOOK CAVE!
Share