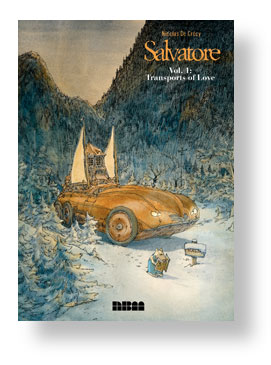 The French artist Nicolas De Crécy has been working in the field for some two decades and has been slowing gaining a following in the United States. His 2005 series, Salvatore, is finally translated for American readers courtesy of NBM and it is a most welcome volume. The book was released in 2005 as part of Expresso, Dupuis’ new imprint of full-color albums and here we get the first two volumes collected.

Using a sparer style than in his other works, De Crécy introduces us to Salvatore, a bear who lives in remote Savoy, high atop a mountain. An acclaimed mechanic, he is selective as to who receives his services while he indulges in rich fondue and pines for Julie, the terrier who stole his heart before departing for South America. He pines for Julie and is building the ultimate vehicle to bring him to her, stealing parts from cars as he finds them but an elusive rare part is the focus of the story.

Meantime, he interacts with Amandine, a pregnant pig, who needs her car repaired. With her exceptionally poor eyesight, the sow engages in a series of antics akin to Mister Magoo. In time, she gives birth but one of the piglets, Frank, has gone missing. She searches for her missing child before giving up, settling down and getting a job so she can raise her remaining eleven children.

Their stories intertwine, intersect, and parallel one another in comical ways in this fanciful world where humans and anthropomorphic animals coexist. The emotions displayed by our main characters are well defined and the social observations are finely crafted by the author.

We’re treated to poignant flashbacks to Salvatore’s brief romance with Julie along with comical bits as Amandine’s car goes flying off the mountain top. The mix of comedy and drama is welcome and feels truer to life than books that are one or the other. The artwork may be simplified but detailed enough to give us a strong sense of time and place. The work benefits from the color by Ruby and Walter which is subtle and aids the storytelling.

We’re left with dangling threads and one wants to know if Amandine finds Frank and if Salvatore reaches Julie and if Julie did marry someone else. With luck, this entertaining book for young adults and up will do well enough that we are given a chance to find out.