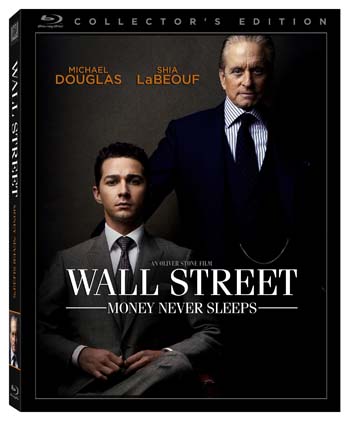 The original [[[Wall Street]]] was a reflection of the times, showing how enticing working in the financial sector can be and how the huge sums of money involved can blind people to depths they will sink to chase it. It was a story about seduction and about family. That it came out when the markets were in the headlines gave it additional strength coupled with Michael Dogulas’ winning performance as Gordon Gecko. His “Greed is Good” was the most overused catchphrase in America until “Show me the Money.”

The sequel was almost demanded by the public because they needed some way to better grasp the enormity of the financial market meltdown that began in 2008. Director Oliver Stone was only too happy to respond. Revisiting the former lion of Wall Street in a new era would have made for a fascinating character portrait.

Unfortunately, the sequel, [[[Wall Street: Money Never Sleeps]]], doesn’t know what it wants to be. In some ways, its a repeat of the original as Gordon Gecko once more seduces a hungry, nave trader, this time played by Shia LeBeouf. In other ways, its a story of second chances as Gecko watches the situation that he prophecised and hungers to get back in the game and the choices he makes to accomplish the goal. It’s also a semi-documentary, retelling the Goldman Sachs story, but the message is clouded over with all the other storylines, notably Susan Sarandon as Shia’s mom, a nurse turned real estate speculator who is in over her head. While it reflects a true issue of the times, it doesn’t add anything and actually detracts from the core storyline.

The movie is packed with characters and events and threads but the film doesn’t mesmerize as the first did. Instead, it plods along and feels overlong, making one thankful for the scenes Stone did delete. Screenwriters Alan Loeb and Stephen Schiff needed to decide who to focus on and what was important rather than give us too much. Was it a story of family? Redemption? Second chances? Revenge? We got some of all those themes without feeling it was really about any of them.

Douglas is a welcome treat any time on the screen and he makes Gecko a far more sympathetic figure showing that eight years in prison really did change him. His efforts to reconnect with his daughter Winnie are strong. Played by Carey Mulligan, Winnie is also strong but can’t see that she has fallen for Jake (LaBeouf), too closely resembling her father. Emotionally hardened, Mulligan lets the shell crack bit by bit out of love for Jake and eventually her father. But she remains fiercely independent throughout but needed to have more of a point of view, rather than drift through the story. Josh Brolin is the real bad guy this time and he does a fine job, giving us someone to hiss and pin our personal economic misery on.

Overall, the story needed to be tighter and it needed to avoid repeating threads from the first film. Still, the Blu-ray, now out from 20th Century Home Entertainment, makes for an entertaining way of spending a cold winter’s night.

The blu-ray comes with a variety of extras that you won’t find on the standard DVD. As usual, Oliver Stone provides a fact-filled commentary track that is informative and enjoyable. Stone also conducts a roundtable chat with his cast so hearing the actors hold forth on the complexities of finance seems unnecessary. More fascinating is the 50 minute “Money, Money, Money: The Rise and Fall of Wall Street” feature that is a solid documentary on how the film reflects what really happened and touches on how business and Hollywood intersect. The Fox Movie Channel offers up five mini featurettes that can be skipped. As mentioned earlier, there are  15 deleted/extended scenes, none of which are missed from the final cut. Stone’s commentary here, though, nicely explains his choices.

Overall, the movie helps crystallize the issues we’re still grappling with and is better than one had feared but it still should have been better. The disc’s extras help provide valuable information but you really need to be a serious fan of the material to own this.