REVIEW: A Trio from Hitchcock — “Notorious”, “Spellbound”, and “Rebecca” 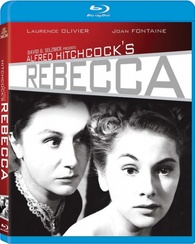 Alfred Hitchcock is today best known for his work in the 1950s and 1960s, thanks to Universal and Warner Bros. steady stream of restored re-releases on Blu-ray but recently, 20th Century Home Entertainment reminded us that the master director wasn’t exactly idle in the years before. A trio of his 1940s works – Notorious, Spellbound, and Rebecca – are now out on Blu-ray for the first time and it begs a fresh look at his black and white thrillers.

Hitchcock began his stormy relationship with MGM producer David O. Selznick with 1940’s Rebecca, a psychological drama which is noteworthy as the director’s first American film. Adapted from Daphne du Maurier’s bestseller, it featured Laurence Olivier, Joan Fontaine, and Judith Anderson. Being a gothic tale of loss, while gently questioning whether or not Olivier killed his first wife, it was a good fit for Hitchcock, introducing him to the American way of shooting a feature film. Clearly it worked since it went on to win a Best Picture Oscar.

While Selznick ordered a faithful adaptation, the Production Code insisted that a key plot point be altered from the novel which left some in the audience incensed. Today, few of us have read the work and the alteration doesn’t seem all that bothersome, just a neat Hollywood comeuppance.  Still, Hitchcock made an atmospheric film with many nice touches hinting at better efforts to come. He was unhappy with the resulting film and fans have remained divided over its merits. Any fan of the director will want to sample this and make up their own minds.

The film was previously restored and therefore transferred nicely to high-definition, making this nice to watch. Cinephiles will appreciate film critic Richard Schickel’s commentary. Other extras carried over from the DVD are  “The Making of Rebecca” (28:08); “The Gothic World of Daphne DuMaurier” (19:02); Screen Tests (9:07); and the original 1938 radio adaptation featuring Orson Welles (59:35); a 1941 Cecil B. DeMille version with Ronald Colman, Ida Lupino and Judith Anderson; and a 1950 version with Olivier and Vivien Leigh; and interviews with Peter Bogdanovich and François Truffaut. 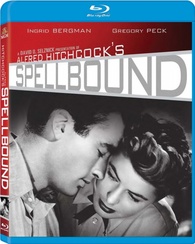 Spellbound was a 1945 release, the result of producer Selznick wanting Hitch to make a positive movie about psychoanalysis, based on his own experiences. Of course, the director used that as a launching pad, but also resulted in his next film, Notorious, being sold to RKO and their relationship coming to an end. Selznick was most unhappy with the story of Dr. Ingrid Bergman who begins to ignore her work to romance Gregory Peck, the newly arrived director of Green Manors – or is he? Apparently, he’s an amnesiac who may also be a murderer, putting Bergman’s life in danger.

This is a middle of the pack work from Hitchcock but has many solid moments of intrigue although the scripting and characterization lacks the sharpness seen in subsequent films. It could have been the Selznick influence since his very next film has the director taking a quantum leap forward.

The producer was not only unhappy with the film’s story but disturbed to see Salvador Dalí hired to illustrate delusional scenes during a dream sequence which resulted in the 20 minute sequence being orders cut dramatically. William Cameron Menzies was brought on to oversee the dream moments, creating a different look than the one Hitch envisioned. Visually, the black and white movie was moody with a burst of red seen towards the end, which was thankfully restored when this came out on DVD a few years back.

The movie does have a nice score from Miklós Rózsa although the producer favored using Bernard Hermann, who proved unavailable which worked out for the best since Rózsa won an Oscar for his work despite the director not liking it. 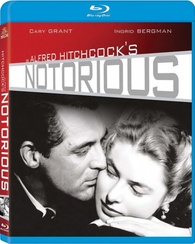 Notorious, co-written with Ben Hecht, is a post-World War II spy caper that sees Ingrid Bergman recruited by agent Cary Grant to infiltrate a Nazi ring in Rio. But first, she falls for Grant before being asked to seduce Nazi leader Claude Rains. Obviously the stakes get raised along the way but you see many of the hallmarks of Hitchcock’s style represented here. We have the MacGuffin (something atomic)), the icy beauty, the double-0dealing, and a great cast. What’s unusual, though, is that this is a topical storyline, something he normally avoided. Similarly, the romantic triangle is overt here unlike some other works. What is interesting though is that you begin to change your feelings towards the two men, no longer hissing at the German and rooting for the American as their words and deeds reveal who they really are.

The movie was an evolutionary one for Hitch as the themes and characters are deeper than past films and visually it is filled with atmosphere and tension. There are some scenes here, such as the one in a wine cellar, that keep you on edge and has shots still studied in film classes. Thankfully, the film was restored for its DVD release and looks even better with the Blu-ray transfer.

The disc comes with commentary from Film Professor Rick Jewell who knows how to lecture without losing his audience; and  a far less engaging commentary from Film Professor Drew Casper.  There’s a separate Isolated Music and Effects Track highlighting Roy Webb’s work on the score. Carried over from previous releases are “The Ultimate Romance: The Making of Notorious” (28:22) ; “Alfred Hitchcock: The Ultimate Spymaster” (13:10); “The American Film Institute Award: The Key to Hitchcock” (3:20). You also get the 1948 Radio Play starring Joseph Cotton and Ingrid Bergman and several Hitchcock Audio Interviews with Peter Bogdanovich and François Truffaut.