Reviews from the 86th Floor: Reviews by Barry Reese 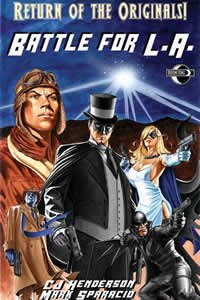 This is a key book for Moonstone, since it’s a major team-up between a handful of the “Return of the Originals” characters: G-8, The Phantom Detective, Domino Lady, The Black Bat and Secret Agent X. I’m pleased to say that overall it’s a success but there are several flaws that keep it from being a classic.

First of all, let’s address one thing: I don’t consider this a “graphic novel” despite what the back cover says. A better term might be “an illustrated novella” since this is not a novel in comic book form. This is text, with many black-and-white illustrations scattered throughout. There are not illustrations on every page and there is no panel-by-panel sequential storytelling. I don’t mind paying $9.95 for 84 pages of story and art in a graphic novel format but I’m not keen on paying $9.95 for what (at best) would be termed a novella.

The back cover trumpets that the events contained therein are “based on true historical events” that are only now being declassified. I was immediately confused since I assumed the “Battle for L.A.” was in reference to the Great Los Angeles Air Raid of 1942. But the back cover says the story is set in February 1945, so I guess it just took the 1942 incident as inspiration for this story?

Anyway, Secret Agent X is badly injured while investigating a threat of supernatural origins and in his stead a group consisting of The Black Bat, The Phantom Detective, The Domino Lady and G-8 are assembled to pick up the mystery and resolve it. The real star of the show is The Phantom Detective, who gets most of the best scenes and is crucial to the wrap-up of the whole affair. I really enjoyed how the character was written and it’s inspired me to seek out more stories featuring him. The Black Bat is consistent with the Moonstone version of the character but didn’t really feel like the original incarnation — which I’m sure was the point. The Domino Lady doesn’t get a whole lot to do, aside from looking ravishing, but she’s a pleasant character to add to the mix. G-8 felt superfluous to me.

The art varies from beautiful to “why in the world did they choose to depict *that* scene?”, with most of the pictures falling on the “beautiful” side of things.

My biggest complaint would be that the length of the story forced several things to be compressed. We have a lot of buildup to The Phantom Detective infiltrating a meeting but almost of the events are told to us in exposition after the fact — and the ending consists of a big battle with the monster, then a quick wrap up of the whole thing where we don’t even see the main characters.

Do I recommend it? Yes. But with just a few differences, it could have been great.