Review: ‘Shazam! The Golden Age of the World’s Mightiest Mortal’

[[[Shazam! The Golden Age of the World’s Mightiest Mortal
]]]By Chip Kidd, with photographs by Geoff Spear
Abrams ComicArts, 246, pages, $35 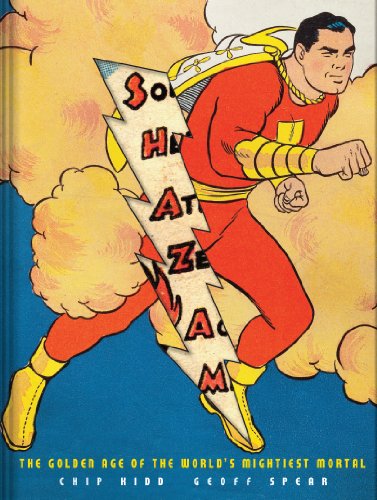 With one magic word, Billy Batson turned from a 10-year old orphan into Captain Marvel. It was a form of wish fulfillment that beat [[[Superman]]] and may well explain why Fawcett’s comics were outselling DC Comics’ Man of Steel. Maybe it was CC Beck and company’s clean, slightly cartoony style. It was probably a combination of these factors, but for a time, comics featuring Captain Marvel and his extended family were outselling Superman in his own title or [[[Action Comics]]] and [[[World’s Finest Comics]]].

On the other hand, Superman beat the [[[Big Red Cheese]]] in one arena and that was in licensing. There was bread, a comic strip, a radio series, the amazing Fleischer cartoons, the serials, and so on. Captain Marvel, most know, had the Tom Tyler serial and that’s about it. Well, not quite. Thanks to über-fan Chip Kidd, we now know that there was plenty of licensed stuff for the kids. In the lavishly illustrated Shazam!, Kidd along with photographer Geoff Spear take us on a tour of the obscure and little-known product to carry images of the good Captain and his pals.

The prose is breezy and gives us a cursory history of the character and the company that brought him to light. There’s little in the way of analysis but there are many interesting anecdotes, some of which were new even to a vet like myself. It would have been interesting to gain a greater understanding of why Fawcett couldn’t parlay their sales success to a greater licensing presence, which may well have allowed them to outlast his competitor in the years that followed.

In a more or less chronological order, we see artifacts from the Captain Marvel fan club, toys, costumes, badges, contest prizes and the like. Most of it carried artwork produced by Beck’s New Jersey studio or taken from the comics themselves, so they maintained that great look and feel of the comics. There’s Beck’s powerful hero in flight alongside Mac Raboy’s graceful Captain Marvel, Jr. and the plucky Mary Marvel, first envision by Marc Swayze. The book expands its scope to include other Fawcett heroes who benefited from association, notably [[[Spy Smasher]]]] who Kidd equates as Fawcett’s Batman. While DC managed to license Superman, Batman, and Wonder Woman, Fawcett seemed to outperform them in terms of characters found on product although DC’s heroes were in higher profile venues such as comic strips and radio.

It is nice to be reminded that it was Fawcett that figured out how to grow the franchise with the teen sidekick additions long before Superboy or Supergirl found their way into print. Heck, we get pages of licensed product featuring Hoppy the Marvel Bunny who preceded Krypto by 13 years. I had never imagined the funny animal incarnation would merit any merchandising but there are miniature figures, temporary tattoos, and paint book.

There’s a charm to these products from the 1940s, small in size and easily affordable for mere dimes. We get to see some of the correspondence the good captain sent out to his fans, including news and contests.  Most of these items are rare and fetch high prices and its terrific to see them more or less catalogued in this handsome volume.

Kidd and Spear also take the time to show us the illegal knockoffs from Cuba and having these here, truly makes this book fun to flip through.

This is a loving tribute to the character that goes a long way to highlight just how popular he truly was during comics’ golden age. It certainly belongs in your comics library, along with Kidd’s similar tributes to other characters from his youth.