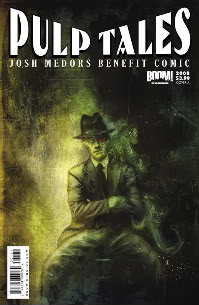 The book is set to debut in limited number at San Diego Comic Con later this month before a full retail run (though no date on the public release was given).

Two covers will be available, one by Ben Templesmith for $3.99 and one by Medors for $9.99. The comic features stories by Steve Niles, B. Clay Moore and others.

Boom editor in chief Mark Waid had this to say:

"Comics are tricky when it comes to real issues like cancer," said BOOM! Studios Editor-in-Chief Mark Waid. "This is an industry that deals with men and women who are larger than life, who by all rights could cure cancer in an afternoon. But those heroes can’t do that, even in a world of limitless possibility – they are powerless because we are. Using PULP TALES to raise money for Josh Medors proves just how powerful comics and their fans can be in the face of adversity, and the important thing here is showing Josh and his family how true that is."