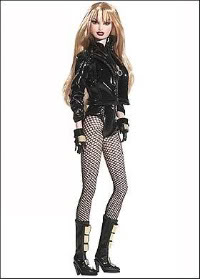 We may finally have the next Mary Jane’s exposed thong statue. Apparently some people are getting bent out of shape about the new Black Canary Barbie, which you can see at right.

The Sun, a paper in the UK, ran a story under the header "S&M Barbie is lashed by the public."

Makers Mattel say Black Canary Barbie, out in September, is based on a DC comic superhero of the same name.

But religious group Christian Voice said: “Barbie has always been on the tarty side and this is taking it too far.

Let’s just go ahead and put the brakes on the outrage train right there. This is one group of people who know nothing of the context of the character and are offering a kneejerk opinion.

Someone please send Christian Voice a copy of All Star Batman and Robin so they can see what actual filth is.