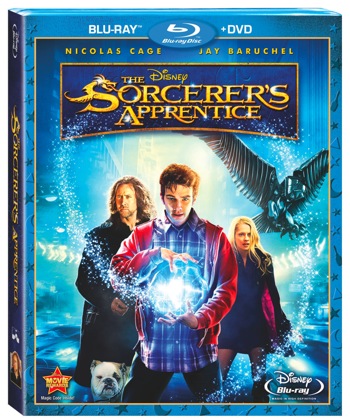 People have been adapting works of art since time immemorial adjusting the details for the era and culture. There appear to be countless versions of what happens when a sorcerer leaves his apprentice alone to complete his chores. This led to Johann Wolfgang von Goethe’s 1797 ballad, which was adapted into a symphonic poem by Paul Dukas in 1890. In the 1940s Walt Disney used both as an inspiration for the most beloved sequence in [[[Fantasia]]], as Mickey Mouse plays the Sorcerer’s Apprentice. These days, with everything from the Disney vaults ripe for reinterpretation, it was inevitable that someone would turn this enchanting sequence into an over-the-top spectacle.

Actor Nicholas Cage is credited with the notion for this retelling of [[[The Sorcerer’s Apprentice]]], which reunites him with director Jon Turteltaub, with Disney hoping for some National treasure magic to be sprinkled over this warmed-up rehash of the familiar. The Sorcerer’s Apprentice, one of the summer’s more disappointing offerings, is out on DVD today in the usual assortment of formats and combinations.

In this retelling, written by Matt Lopez and the team of Lawrence Konner & Mark Rosenthal (it amazes me these guys still get work) from a story by Doug Miro, Carlo Bernard and Matt Lopez, the Sorcerer in question is Balthazar Blake, one of Merlin’s three apprentices and the survivor of the horrors at the fall of Camelot. Balthazar and his best friend Maxim Horvath (Alfred Molina) both loved Veronica Gorloisen (Monica Bellucci), who sacrificed herself to stop Morgana le Fay (Alice Krige) from raising an army of the dead. Veronica absorbed le Fay’s soul and was encased in a nesting doll called the Grimhold. We’re then told that Horvath turned on Balthazar and they fought for centuries while Balthazar stopped the worst of le Fay’s believers, turning each into a nesting doll surrounding the first. Finally, Horvath was contained and Balthazar could proceed with his mission: to find Merlin’s true successor, the Prime Merlinian. He would know of his success when Merlin’s dragon ring responded to the right person.

For a millennium, Balthazar searched the world until fate brought 10 year old Dave Stutler (Jake Cherry) to his Manhattan shop. But 10 year old boys don’t always follow instructions and after being given the ring, which curls around his finger, he accidentally unleashed Horvath, beginning a new battle between former friends in that eternal struggle between good and evil – that is, until both got caught in a Chinese urn for a decade.

Stutler (Jay Baruchel) is now a socially awkward physics student at NYU when both magicians reappear, plunging his life into a new form of hell. Balthazar slowly convinces Dave to accept training and his destiny, but balks when Dave tries to make time for Becky Barnes (Teresa Palmer).

After that, things get awfully predictable as things explode, cars race
and it all comes down to a matter of believing in one’s self. You feel
like you’ve seen it all before and while it’s visually entertaining,
it’s cold and somewhat soulless. There are story logic lapses as well as
inconsistencies in how the magic works. Even Trevor Rabin’s score has
hints of other films and does not help the movie. About the best thing
about the movie is that Cage’s Balthazar has loved and lost, and has
some sympathy for Dave’s situation. He is one of the more sympathetic
masters we’ve seen in genre films in a while.

The rest of the cast is appealing and they work well together but the
sum should have risen above the sum of the parts to get noticed in the
increasingly competitive summer season.

The Blu-ray transfer looks and sounds fine and is accompanied by a
plethora of the usual assortment of featurettes. There are five deleted
scenes, some of which rounded out the characters, especially Becky. The
outtakes are so-so as are the various pieces on the technical aspects of
making the film or the use of wolves and puppies. The Science of
Sorcery is the most engaging piece as they try to show how little
difference there might be between the two. Drake Stone’s (Toby Kebbell)
stagey wardrobe also gets a nod.

Cage is a knowledgeable fan of the genre who has appeared in more than
his share of movies treading the same territory. He should have demanded
more of the story to service his engaging character and do honor to the
core legend that has endured and will no doubt be retold for the better
in the future.