CASING THE CON-Convention Reports and Reviews by Bobby Nash 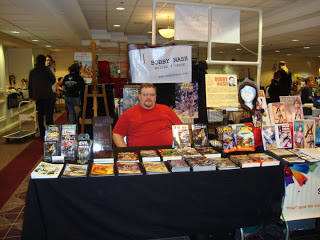 On November 5 – 6, 2010 I was proud to be one of the guests on hand for the first Memphis Comic And Fantasy Convention in Memphis Tennessee. First year conventions are always a mystery when deciding whether to do the show as a guest. Like most first time shows, this one had a few first year bugs to work out, but they were minor. The guest list was impressive and I had a wonderful time. The set up was well done although I would have preferred to see more events happening in the main hall of the Cook Convention Center. Along with the open main hall there was a dealer’s room, artist alley (where I was set up), and a panel room. 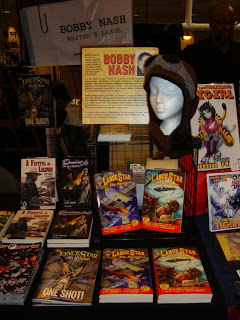 The convention was very family friendly and I was excited to see a lot of kids on hand. Which brings me to the highlight of my weekend. The show opened to the public at 1 p.m. on Friday. However, before that, from 10 a.m. until 1 p.m. the convention, in conjunction with local schools brought kids to the show on a field trip. There were Q & A sessions with actors, artists, and writers as well as demonstrations, cartoons, video games, movies, and costumed heroes and villains all signing autographs. I was excited to see all of the kids on hand. Not only was their enthusiasm infectious, but it was great to see them looking over the comic books and art. If I had known about the field trip beforehand I would have made sure to bring some Life In The Faster Lane cards to pass out. Still, everyone who stopped by my table got a Lance Star: Sky Ranger postcard, which the kids seemed to enjoy. 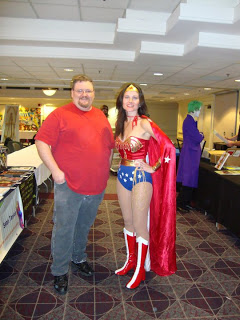 I had a great time at the first Memphis Comic And Fantasy Convention. I certainly hope there is a second show in 2011 and that they invite me back again. You can learn more about the convention at http://www.memphiscfc.com/. http://www.facebook.com/album.php?aid=573923&id=625160511&l=b22ef141ce (photos can be viewed even if you don’t have a Facebook account).