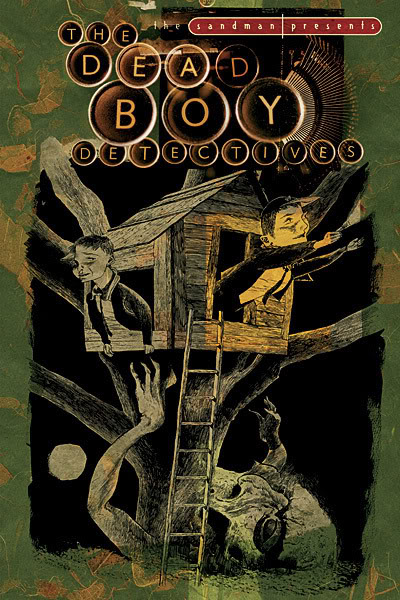 By my count, there are four good reasons to buy [[[The Sandman Presents: The Dead Boy Detectives]]], now out from Vertigo.

Third, it’s part of The Sandman world, and there are plenty of readers who snap up anything associated with Neil Gaiman’s creation.

But the last — and, for me, best — reason to pick up the book is that it further illustrates Ed Brubaker’s dexterity as a writer. I’ve long said that the thing that makes him so talented is that if his name wasn’t on the cover of his comics, you wouldn’t be able to recognize him as the author (also, his books are all quite good).

Unlike a Grant Morrison, Warren Ellis or Brian Michael Bendis, Brubaker writes comics without stamping his voice all over them. And, in [[[The Dead Boy Detectives]]], he shows off a wholly new voice, slipping seamlessly into the world of the ghostly boy sleuths and their London setting.

Like all great P.I. stories, this one begins with a girl, then gets all weird with shriveled dead bodies, witches and immortal creeps. It’s not quite unpredictable yet manages to be surprising.

But, mostly, the great characterization of ghosts Charles and Edwin and their childish interplay is what makes this one a winner. Well, that and the other reasons listed above.

Van Jensen is a former crime reporter turned comic book journalist. Every Wednesday, he braves Atlanta traffic to visit Oxford Comics, where he reads a whole mess of books for his weekly Reviews. Van’s blog can be found at graphicfiction.wordpress.com.