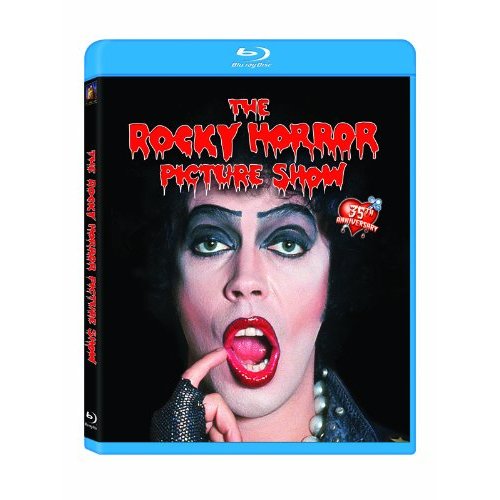 I had heard about [[[The Rocky Horror Picture Show]]]

, that it was this amazing off-the-wall show that had become a midnight phenomenon and people even began interacting with it. Obviously, this was something I had to see but being away from New York City, attending college at Binghamton made that problematic. That is, until my roommate booked it as an offering during the school’s weekly free film program. We kept a 16 mm film projector in the dorm room and several times a week, we’d knock off studying, order a Domino’s pizza (because we had no other choice) and screen a film.

John insisted Deb and I had to see the film in our room to appreciate the story and song before we attended a full-fledged screening so we understood when to scream out or throw toast or duck from the rain. I’m glad he insisted because I could see it as a movie before I saw it as a pop culture icon.

I’m therefore delighted to now recommend the 35th anniversary Blu-ray edition of the movie, now out from 20th Century Home Fox Entertainment. First of all, owning it is just cool. The care in restoring and transferring the film to high definition shows in the brilliant look on screen. Yeah, it was shot on the cheap and now the flaws are glaringly obvious, but so are the inventive sets, costumes and dance moves. It’s the best the film has looked since 1975 when the prints were still pristine. The sound is equally luscious so you can sing along with gusto.

It’s certainly fun to join Brad and Janet on that dark and stormy night, revisiting the house of Dr. Frank N. Furter and his oddball servants. The performances are over-the-top and never fail to entertain. Richard O’Brien’s madcap tribute to the science fiction movies of his youth has aged quite nicely.

The film is available in this two-disc set that contains all the existing extra features and then some new ones for the anniversary celebration. You get commentary from O’Brien and Patricia Quinn (Magenta); a track offering you audience participation prompts; a piece on the late night performances that have endured nearly as long as the film itself, plus a trivia game, a story building game, a screen saver, cast and crew bios, and web links. The participation track, Rocky-Oke: Sing It! is great so you can host your own event or prepare for a more public event.

The second disc offers up two deleted songs: “Superheroes” and “Once in a While”, with one of them remastered from the UK so appears in HD while the other is in standard definition. There are also “A Few From the Vault”, outtakes, clips from the VH1 special, a short documentary on the film and its cult following, a misprint ending and an ending featuring “The Time Warp” instead of “Science Fiction Double Feature,” the film’s original trailers, and the VH-1 Pop-Up Video version of “Hot Patootie”. [[[The Midnight Experience]]] offers you multiple options on exploring the cult phenomenon, so you can use the Trivia Track, Vintage Callback track from the 1983 audience Par-tic-i-pation album, a virtual Prop Box to hurl items at the screen using your remote, and The Late Night, Double Feature, Picture-in-Picture.

All told, this is one of those cultural Must Haves and it’s about time we had it looking this good.