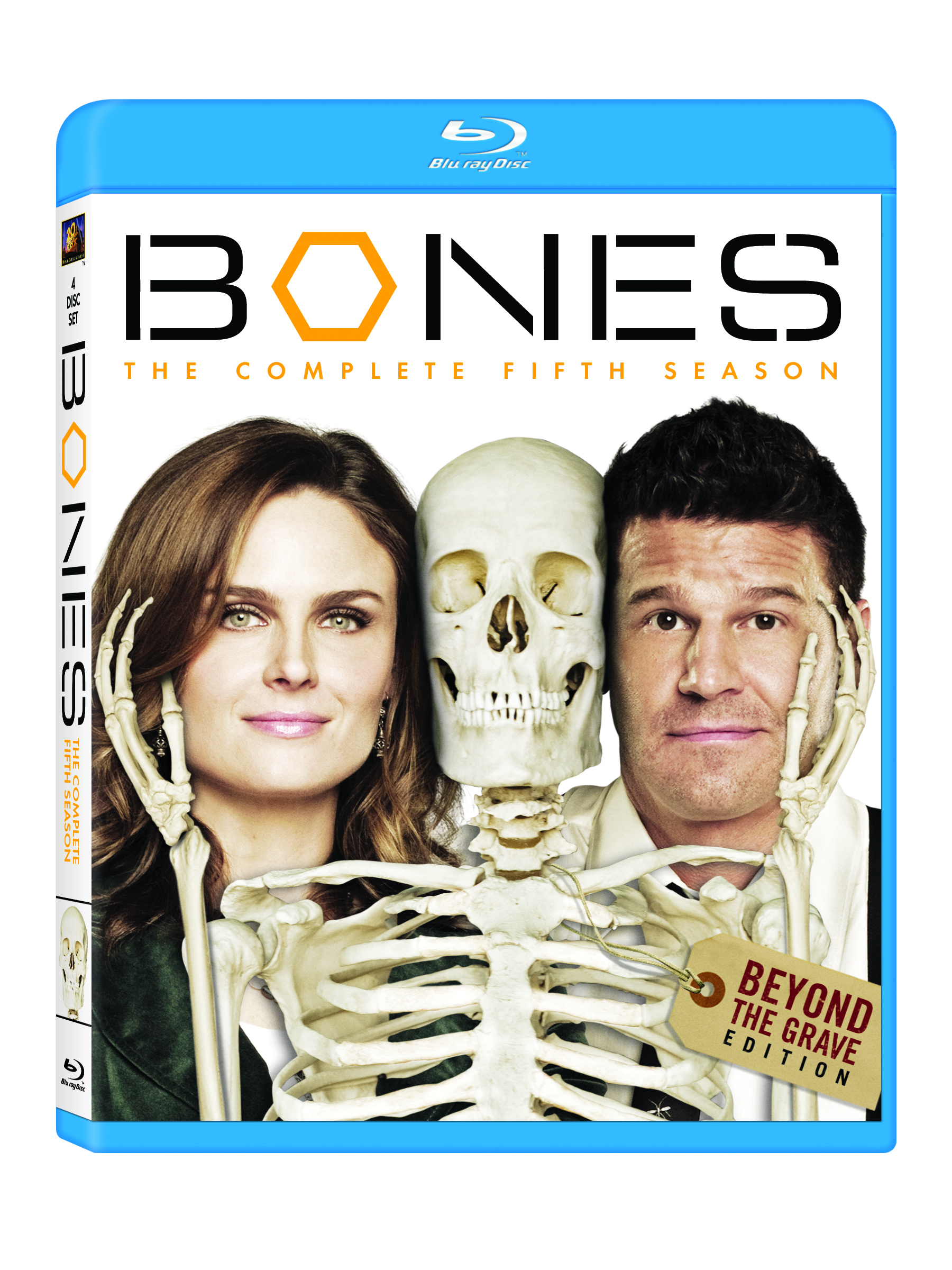 There’s a certain grisly reality to CBS’ collection of [[[CSI]]] series that does the procedural part well, but depicts its characters as a particularly colorless bunch, overly serious and making the shows just a tad less engaging. Fox, wisely jumped on the police procedural bandwagon with something similar but certainly livelier.[[[Bones]]], based on Kathy Reichs novels, is a veritable rainbow of character types that has kept things captivating for six seasons now.

The fifth season, now out on DVD from 20th Century Fox Home Entertainment, takes a mature set of characters and stirs the pot a bit as the season progresses. The basic set-up has a team of forensic anthropologists working for the Jeffersonian, standing in for the Smithsonian, handling cases for the FBI, led by Special Agent Seely Booth. The title character is the nickname of Dr. Temperance Brennan and while she’s the focal point, the series has evolved into a wonderful ensemble. Over the previous four seasons, we’ve seen the cast grow as we’ve met friends and family of each of the core characters, most of whom serve to counterpoint the actual cases being investigated.

Since the third season, the series has also been having a rotation of interns working for Brennan, each with their own personality and quirks, so they also serve as a constant freshening of the characters and situations. Hart Hanson, who has adapted the novels for television, has done a strong job with keeping the series fresh and never less than entertaining. He also allows his characters strong points of view so Brennan, who is so literal minded she has trouble interacting with most people, is constantly trying to understand why people do what they do. Booth, on the other hand, is a practicing Catholic and dislikes having his faith challenged but also explains the world to Brennan in ways that make her reconsider the world.

Hanson did a great job casting David Boreanaz and Emily Deschanel as the leads since they not only play well off one another, but have grown as performers. The remainder of the cast has also been well populated with a strong group of characters. They spark off one another quite well.

The fifth season pick sup with Booth recovering from his brain aneurysm
surgery and over the first third of season, we see him regaining his
confidence which nicely allows him to explore his place in the world.
Meantime, Jack Hodgins and Angela Montenegro realize they continue to
have feelings for one another so the much put-off wedding finally
happens later in the season. A different romance, that of Dr. Lance
Sweets and intern Daisy Wick, percolates throughout the season and
reaches a different point by the finale.

The show also looks back more than once, as the Grave Digger, a
recurring threat from previous seasons, finally arrives for trial and
the team has to ensure he is convicted with enough evidence to seal his
fate. The show also achieved its 100th episode as Booth and Bones
finally tell Sweets of their first case together, which was a fine
outing, directed by Boreanaz.

Even thought things have been fun four five years, Hanson also sensed it
was time to turn things on its head. The final episode actually splits
the team apart in convincing ways, with Bones and Daisy headed for a
year-long dig, and Booth returns to the Army as a sharpshooter for
deployment overseas. What will the FBI and Jefferson be like without
them and how will the experiences alter the players and their
relationships with one another?

The cases are a nice variety that shines spotlights on different fads
and sub-cultures, educating the audience and keeping things interesting.
If anything, Angela’s technical wizardry strains credulity but the show
always does its homework on the forensics and the process involved. It
just does it with verve its competitors lack.

The 22 episodes look great on DVD, and better on Blu-ray. They come with
a handful of commentaries and two extended episodes. One of featurette
of note is the look at Boreanaz directing “The Parts in the Sum of the
Whole”, the show’s centennial episode. You get the usual gag reel and a
small number of deleted scenes. We’re offered “The Bodies of Bones”
which shows us the make-up tricks involved in the grisly crimes alone
with “The Nunchuck Way”, where a stunt coordinator teachers actors to
use the Japanese weapons.

While not a great way to start viewing the series, you don’t need to
know much to get in the swing of things. The show remains strong thanks
to inventive writing and wonderful performances, making this one of the
more underrated crime shows currently airing.