“Wild Bill Hickok and the Philosopher’s Stone” a tale from the anthology VAMPIRES VERSUS WEREWOLVES, Age of Adventure, Wayne Skiver, Publisher
Written by C. William Russette 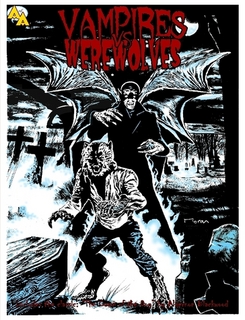 Mixing things in stories is problematic at times, especially for authors who don’t mix well. Even mixing similar things, like say vampires and werewolves can present some issues. A writer has to steer clear of clichés, remain true to the basic concept of each creature type, and sprinkle enough of his/her self into the flow to make it…well, flow. It gets even more complicated when the combining and mingling of ideas, concepts, and tropes involves several aspects of the tale, such as monsters and genres and literary devices. Hard sell to make sometimes for a lot of writers.

“Wild Bill Hickok and the Philosopher’s Stone”, a short tale that appears in the newly released Age of Adventure anthology “Vampires Vs. Werewolves”, takes a lot of ideas and characters that probably were never meant to exist in the same story and stirs ‘em together with a big spoon into a pretty satisfying literary Brunswick stew. The title character is indeed Hickok of Old West fact and fiction, stood up alongside other men plucked from the era. Russette’s handling of known characters is deft, precise, and done in a way that would make you think he knew all about Hicok, Rudibaugh, and others. He also gives the impression of an author who understands the psyche of such men and what would drive them on even in the face of, well, monstrous odds.

And to his monsters. Russette blends the horrific existence of creatures of lore into this Western scarefest so well that the terror of their existence and actions blend almost seamlessly with sixguns shooting, horses running, and men living and dying in the sand. The monsters don’t seem added in, they seem a part of the fabric of the tale told. This is truly a feat to note since westerns are not Russette’s typical genre of choice.

It is obvious that Russette is not stomping familiar ground at times, particularly in dialogue as well as description. Sometimes it is not enough, sometimes too much. That should not, however, keep one who enjoys Old West action laced heavily with occult influences and monsters to boot, from diving headfirst into “Wild Bill Hickok and the Philosopher’s Stone.”

Three out of Five Tips of Hancock’s Hat-This is reserved for stories I really like and see more potential to tip the hat to the author in the future and will definitely read again.