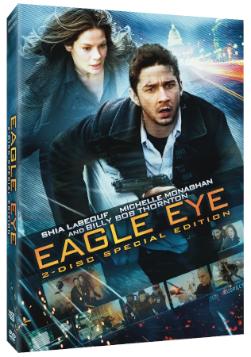 Action adventure movies work best when you have someone to root for or something to think about. Ideally, the movie offers both otherwise the action is mindless and the time in the theater wasted.  [[[Eagle Eye]]] makes you think about the price of privacy as a government entity known as Aria uses every digital piece of data available to manipulate people into help it execute a program design to sever the Executive Branch of the government from the waking world.

The film focuses on the prime players, a slacker named Jerry Shaw (Shia LaBeouf) and a thirtysomething paralegal Rachel Holloman (Michelle Monaghan) who are directed by a feminine voice to comply with orders or things would get bad for them.  In Jerry’s case, he’s framed by Aria as a potential terrorist in the wake of his Air Force lieutenant twin’s death.  For Rachel, her eight year old son’s life is threatened as the boy travels with the school band to Washington to perform at the State of the Union address.

The computer gives them no choice and sees to it that they can follow orders by keeping the police and federal investigators, headed by Billy Bob Thornton and Rosario Dawson, at bay by manipulating street lights, automated construction equipment, and much more.  All along, others have been manipulated to help construct and deliver the means by which Aria intends to rid America of its “corrupt” leaders and begin anew.

Jerry and Rachel find themselves thrown together and learn to trust one another as their three day odyssey takes them from Chicago east towards Washington.  Given their age and background differences, the two avoid the film cliché of falling in love and pausing form saving the world to having sex.  Instead they rush breathlessly towards their destiny.

While the film has lofty goals it fails to work on several levels.  Watching the film with a member of the federal government meant a running commentary of security flaws such as Thornton and Dawson discussing sensitive matters over an unsecure channel.  Also, we’ve seen the computer taking the world to the brink of destruction once a generation starting with the brilliant [[[Colossus the Forbin Project]]] and more recently in John Badham’s [[[War Games]]]. Heck, Aria is merely a cousin to HAL and needs to be deactivated for many of the same reasons. The cross country chase, playing beat the clock, has also been done to death especially when you add in the pursuit in the form of Thornton’s dogged fed. The nice thing about the latter is that at least screenwriters Dan McDermott, John Glenn, Travis Wright, and Hillary Seitz rounded out Thornton’s character without making him the usual one- note player.

That Aria can control all these devices is interesting and when she projects Jerry and Rachel’s lives on television screens to demonstrate how much is recorded and available for research (or blackmail) purposes, the message comes through loud and clear that we have all given up our privacy bit by bit. That’s plenty of good for thought and the featurette “Is my Cell Phone Spying on Me?” is the most compelling piece on the two-disc collector’s set, now on sale.

The variations on a theme are all appreciated but still don’t add up to something that’s greater than the sum of its parts.  We lose all sense of time and place since we never see them eat or sleep or hell, wash up.  To the viewer it’s an endless journey while it isn’t until you watch the extras you realize it has been only three days. Director D.J. Caruso moves things along almost too quickly, not letting the relationships build while continuing to amp up the stakes.

LaBeouf is 21 and plays 25 pretty well, avoiding to come across as any of his previous characters.   He and Monaghan play off one another rather well but his Jerry rises to the occasion and becomes a hero like his deceased twin but the film ends before we find what he chooses to do with this newfound knowledge. Monaghan’s single mom is less developed and goes along for the ride in the name of her son.

The extras provide a glimpse at a nice alternate ending, a handful of deleted scenes, and some fun bloopers.  The various pieces on the making of the film feel perfunctory but provide some nice insight into the filmmaker’s goals.  There’s also a conversation between Caruso and Badham comparing their films and how much technology has changed over the last 20 years.