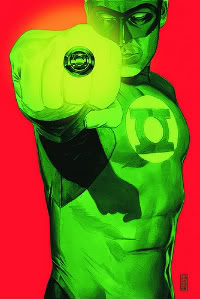 Before we even get started here: SPOILER WARNING!

, is finally here, and it couldn’t be more of an antithesis to Marvel’s Secret Invasion

. While the latter has been a wall-to-wall action blowout, Final Crisis has kicked off with a rambling, contemplative first issue.

Of course, you know the score with Grant Morrison at the helm, and he’s predictably vague and cutesy. And the very first pages fit right into expectations, with a meeting between Anthro and Metron at the dawn of man that alludes to great depth, if not actually providing it.

From there, the book bounces maddeningly from spot to spot, never settling enough to develop a rhthym, or give a firm footing to readers.

There’s Turpin and the Question looking over Orion’s dead remains. There are the Green Lanterns talking in binary (“1011” signals a god’s death). There are heroes and villains fighting over Metron’s chair. There are the villains uniting for the umpteenth time. And…

That last moment I mentioned carries the only real big event occurring within its pages as (BIG SPOILER) Libra stabs the Martian Manhunter through the chest and kills him dead.

Morrison also stops in on the Justice League, visits other Green Lanterns, pops in on the Monitors and sees Anthro transported to the present. Oh, and the continual references to the “Dark Side Club” turn out to point to Darkseid (Get it?), who’s alive and seems to have the anti-life equation.

In case you’re keeping score, that’s about a dozen plot points all strung aloft. And while there are certainly some points of interest, there’s no central narrative. And there’s no answer to the simple question of “What’s the point?”

One of the great aspects of both Crisis on Infinite Earths

was that they took DC’s jumbled universes and shaped them into understandable entities. Thus far, [[[Final Crisis]]] has done just the opposite.

What is the condition of the multiverse? What’s up with the monitors? What’s going on with OA and the Guardians? Who’s the villain? What is Libra’s deal?

All Morrison has done thus far is raise dozens of questions. The problem is that he hasn’t yet made us care about the answers.

On the positive side, J.G. Jones’ art is brilliant throughout.