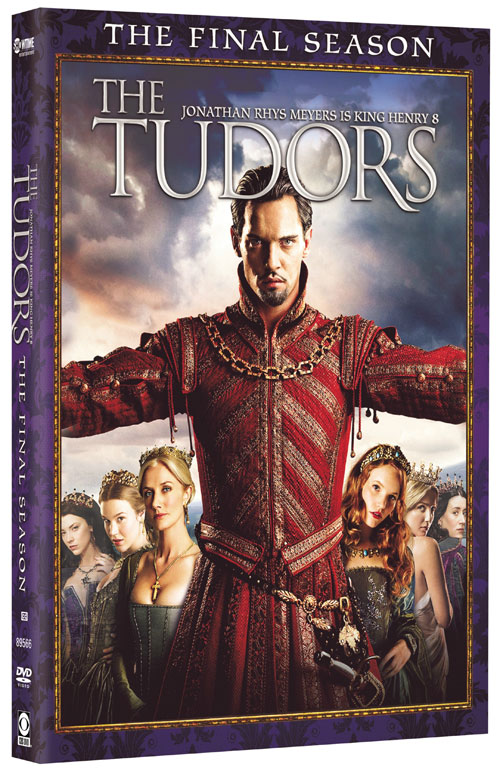 Imagine if you will that we’re all living in the time of King Henry V. His court would be the A list, their comings and goings the subject of gossip at every tavern and pub in England. They were the celebrities of their day, at a time when England was still a small power, finding their voice and charting their destiny.

For four years, Michael Hirst has been delivering a taste of what it might have been like in the Showtime series, The Tudors

. Now, the fourth and final year, covering the final two wives and his death, has been collected on a four disc set released from CBS Home Entertainment.

The show’s success was attributable to the lush visuals, from the costuming to the locations. John Rhys Meyers was a lusty, virile king, craving a dynasty and constantly thwarted. He was a man of voracious appetites, far beyond food, but history denied him greatness. The first season covered his unhappy first marriage to his dead brother’s wife, Catherine, and his true love, Anne Boleyn, challenging the Pope for his freedom. In the end, he broke from the Church, established the Church of England and found himself challenged at every turn.

Hirst took liberties with characters, characterizations, and sequence of events so don’t use this for your homework, but for a sense of what the time was like and players, this is darn good entertainment. The seasons rolled through his loves and losses, with some of the wives coming to life and others barely sketched out. The fourth season suffers a bit from compressing so much into a mere ten episodes.

His quest for a male heir led him to Katherine Howard then the unhappy final wife, Katherine Parr. Age and illness (the dreaded gout) robbed him of his strength and appeal, letting the upper class maneuver for favor or power.

We open in 1540, thirty years into Henry’s reign and he remains strong as he gets to know his fifth and youngest wife, Katherine, a mere 17 years old. While Henry and Katherine are cordial, Thomas Culpepper covets Katherine while currying favor with the king, a subplot that plays out in the early episodes. Henry also gets a chance to realize what he may have missed during an encounter with wife number four, Anne of Cleves, who compares more favorably than does young Katherine. While Katherine and Culpepper play, Henry and Anne clandestinely reunite. It’s certainly good to be the king.

His rages are legendary and Meyers handles the explosive emotions quite well, especially when Katherine’s affair and sordid past come to light. Also, his rocky relationships with his daughters comes to the fore at mid-season as he restores Princesses Elizabeth and Mary to the line of succession. At the same time, politics and religion clash as the Reformation is weakened when Henry takes the Catholics’ side in matters of state.

We rush through his final wife, Katherine Parr, who is closer in age to the now ailing Henry. Clearly, Hirst could not end the series without covering all six legendary wives but one wishes for more  We also get a truncated war with France before illness finally claims the king. Nicely done was a final dream sequence as the dear departed former wives (Maria Doyle Kennedy, Annabelle Wallis and Natalie Dormer) all appear and have final words for their husband.

The show looks wonderful on disc but one wishes the same attention to detail in extras from the first three sets was given to this final set. Instead, there are no extras of any sort but a collection of sampler episodes from Showtime’s other series. A sad way to take our leave of Tudor England but the show is well worth a look.