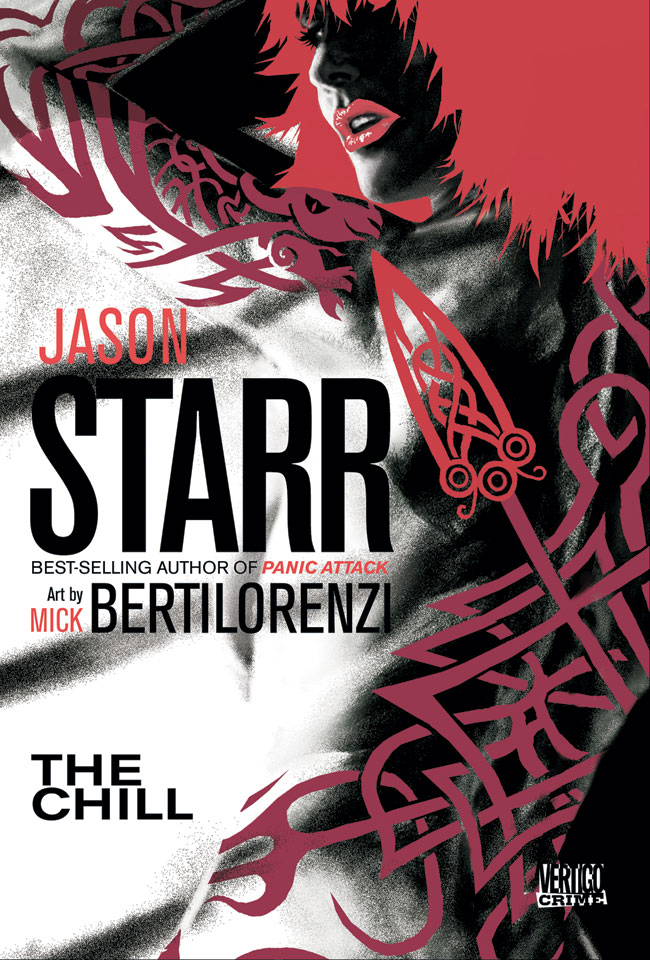 Poor Arlana Flaherty. Raised by her brutal father Cormac, her mother dead; she was ill-prepared for what happened when she finally chose to giver her virginity to a local boy in County Clare the summer of 1967. As they climaxed, the teen died, the first victim of something known as [[[The Chill]]] and her life was never the same.

In the latest offering in the Vertigo Crime line of hardcover graphic novels, up and coming crime author Jason Starr has been paired with Tuscany-based Mick Bertilorenzi to produce The Chill, a story of ancient Celtic magicks and family legacy.

Starr is a newcomer to graphic novels but paces his story well, rarely exceeding four panels a page and giving his artist plenty of room for emotion and detail. The story may begin in Ireland but quickly migrates to America, from Boston to New York as the Flaherty’s seduce and kill, surviving on the unleashed energies from the sexual act.

Their trail of bodies comes to the attention of Boston detective Martin Cleary who trails them to New York and here’s where Starr lets the reader down. Cleary is desperate as he tries to convince his brothers in blue that ancient spells are involved along with invisible culprits but his disgraced career haunts him. Cleary comes across as an unoriginal figure, someone we’ve seen in similar stories and dilutes the sympathy we should be feeling for him.

Similarly, we’re given no real insight in Cormac and how he has lived with the ancient curse plaguing his family. Instead, he curses and smacks his daughter around and while their enduring relationship should be a centerpiece to the tale, it’s given far too little attention, robbing the story of an emotional core. Ariana comes across as unwilling victim or eager accomplice depending upon the moment but we never really come to know her.

Starr also makes certain the NYPD officers dealing with Cleary are the stereotypical underbelly of those sworn to serve and protect. The one exception, because there has to be just one man to believe Cleary (it must be in the rule book) is Detective Pavano, the only sympathetic figure in the entire story.

His strength is weaving in the old Celtic legends regarding Druids and curses and showing how the Irish culture continues to hold on to these beliefs.

Bertilorenzi’s artwork uses the small book format well and in shades of gray brings ancient Ireland and the streets of Manhattan to vibrant life. His character designs are distinctive and he makes Starr’s people as interesting to view as to read their dialogue. Together, they produce a good, not great, bit of crime fiction.