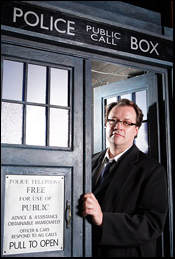 Russell T. Davies, the man responsible for the highly successful resurrection of Doctor Who and its spin-offs Torchwood and The Sarah Jane Adventures, last left his Hollywood career to return to Manchester, England to take care of his ailing partner.

This summer, Andrew Smith was diagnosed with brain cancer. As matters progressed, Smith and Davies decided they wanted to be closer to their friends and family. As of this writing, Smith’s prognosis has remained private.

Davies, whose many credits also include creating and writing Queer As Folk, Casanova (starring David Tenant) and The Second Coming (starring Chris Eccleston), is expected to resume his entertainment industry career at some point in the future.