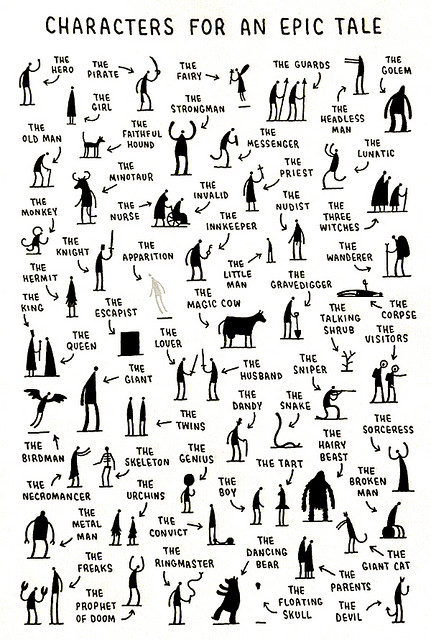 Peter David, writer of stuff, wrote a book about writing comics and graphic novels called Writing for Comics and Graphic Novels with Peter David
(certainly clear in intent) from which we take the following:

If you ask anyone you know whether they need someone who is going to make their life difficult, you would unquestionably get a resounding “no.”  No person would say that he measures the success of his day by how soundly he manages to overcome an implacable opponent.

And yet, many of us do have “villains” in our lives.  Be they oppressive bosses, obnoxious co-workers, bullies at school…on any given day we may find ourselves in a position where we have to outthink, outwit, and outmaneuver those who are in a position to make our lives difficult.

Push comes to shove, we may even find ourselves with our backs against the wall and have to slug it out with them.  In such a situation, it helps to remember that comic book heroes are able to avail themselves of everything from super-science to healing factors in order to bounce back.  We, being mere mortals, tend to break far more easily.  So even as we discuss the ways and means of depicting heroes going toe-to-toe with villains, it helps to remember that talking one’s differences out is definitely the way to go.

Curiously, we tend to think of the hero as the mover and shaker, the protagonist.  Yet the opposite is often true:  It is the villain who actually drives the plot.  He’s the one with the plan, he’s the one with the goal—anything from robbing a bank to world domination.  There’s a variety of possibilities and directions that the villain’s foul schemes can go to satisfy his needs.  The hero, on the other hand, exists for one reason only:  To thwart the villain.  On an average day, the Avengers sit around playing pinochle, waiting for the activities of a villain to spur them to action.  On an average night, Batman is either hanging out at the Batcave dodging falling bat guano, or else he’s patrolling the city looking to find a villain whose endeavors he can thwart.

So as a writer, not only do you need to have a hero with whom your reader can connect, but you also want the reader to understand—and perhaps even sympathize—with the villain’s goals as well.

Is such a thing possible?  Sure it is.  Alfred Hitchcock once pointed out that an audience could be watching a scene in a movie wherein a handsome burglar has concocted an elaborate and clever scheme to gain access to a vault inside a wealthy couple’s home.  As he is working on opening the safe, unbeknownst to the burglar, the couple is on their way home unexpectedly because they left their theater tickets on the bureau in the room he’s burgling.

Tension mounts as the burglar continues to crack the safe while the couple draws closer and closer to discovering.  And what, asked Hitchcock, is going through the audience’s mind during that time?  They’re mentally urging the burglar, “Hurry!  Hurry!  You’re going to get caught!”  Yes, that’s right:  They’re rooting for a bad guy.

It is the ingeniousness of his plans, after all, that are being asked to seize the audience’s imagination.  If the villain’s plan is lame, if the villain is someone who fails to engage the reader’s attention, then not only will the reader not care about his evil doings, but the hero’s eventual triumph over his opponent will seem unimpressive.

That’s why it’s impossible to invest too much energy in either crafting new heroes and villains, or choosing unique ways in which to interpret or reinterpret already existing characters.  Your stories stand or fall on your characters.  If the reader doesn’t connect with the characters, then the most ingenious plot in the world will make no difference at all.

Artwork by Tom Gauld. And remember: you can follow all the NaGraNoWriMo posts here!