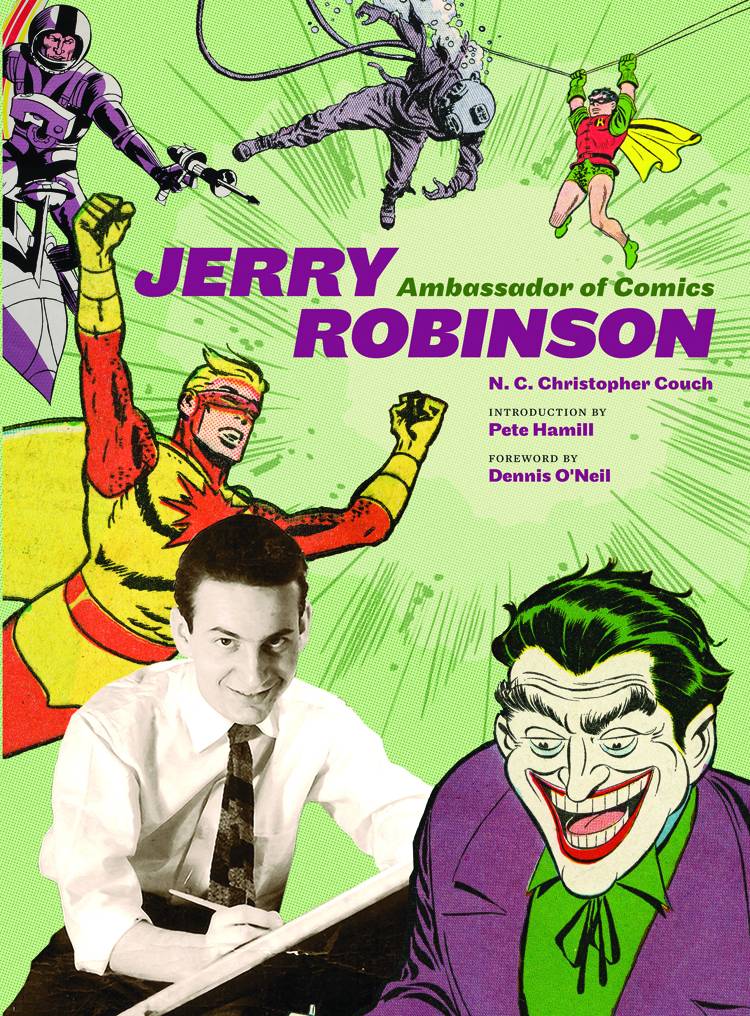 The early days of comic books was a vast frontier as the rules were being written and the flourished so rapidly that the demand for talent was voracious. As a result, just about anyone, of any age, who could hold a brush or tell a story was given a chance to work. The more successful ones built up a client base and then brought in others to assist, paralleling the development of comic strips.

When young Bob Kane added the costumed feature Batman to his list of properties produced for Detective Comics, Inc, he found himself in need of help. He had already been working with writer Bill Finger to take his shapeless ideas and turn them into witty adventures. But, Batman meant Kane also needed artistic help and a chance meeting led to 17 year old Jerry Robinson beginning an artistic career that begins today.

Robinson is one of the last of his generation and remains a vital talent, curating museum shows and encouraging the next generation of talent. His story is known in bits and pieces but for the first time, his wide-ranging artistic career is covered in the aptly named [[[Jerry Robinson: Ambassador of Comics]]].

Written by N.C. Christopher Couch, a former [[[Manga]]] editor and professor at University of Massachusetts Amherst, the book begins with a young Robinson learning to draw on his own while his family fell from the middle class during the Great Depression. It was while Robinson was on a brief vacation in the Poconos that Robinson met Kane and a friendship developed.

Quickly, Robinson was immersed in Kane and Finger’s world, brainstorming stories and characters whenever they were together. Robinson realized he was going to learn by doing and absorbed everything he could with Finger proving a knowledgeable tutor about all manner of fine arts, especially foreign films.

As organized, Couch’s work divides Robinson’s career into thematic chapters but you never really fit all the pieces together. While we know Batman had already debuted in [[[Detective Comics]]] # 27, on sale in the spring of 1939, and can intuit that by the time Robinson began working for Kane it was September, just in time for Finger to create Robin and add him to the feature but we’re never told which issue first featured Robinson’s work. Not long after, though, DC must have commissioned the [[[Batman]]] quarterly title which led to Robinson’s greatest contribution to comic books: creating the Joker. But Couch doesn’t lay it all out for us in a linear manner, so there are jumps and overlaps in Robinson’s career that would have benefitted from a better chronology or timeline as an appendix.

While Finger comes to life in Robinson’s account, Kane is a cipher, a
characterless figure despite his influence over Robinson’s life. We
don’t get a sense of what Kane was like or how they worked artistically.
In less than two years, though, Finger and Robinson both accepted
offers from the publisher to join staff and leave Kane but other than
increased salaries, there’s little explanation.

We see the famed playing card that is said to have inspired Robinson’s
creative juices but the book never addresses the visual parallel to
Conrad Vedit’s appearance in the 1928 film [[[The Man who Laughs]]]. Robinson had previously acknowledged the connection so its absence here is an annoying gap.

Similarly, throughout the book which benefits from the rich collection
of personal photographs, sketches, and finished works that Robinson
wisely maintained through the years, we have no sense of the man’s
personal life. Periodically, his wife Gro Bagn is mentioned and there
are appearances by their daughter Kristi and son Jens, but his role as
father is curiously absent. We aren’t told when Jerry and Gro married,
how he did or did not make time for children so we’re left with the
impression that Jerry was devoted first and foremost to his work. It
would have benefited the reader to have that spelled out.

While today, Jerry is the comics ambassador to a global audience, we
also don’t get a sense of what he thinks and feels about international
comics, the comics market through the years, the rise and increasing
influence of comics fandom, and the field’s future. At least his efforts
in helping fight on behalf of Jerry Siegel and Joe Shuster are given
their due, so the credit can finally be equally shared with Neal Adams,
who most people probably think led the fight alone.

What we do get, though, is a wonderful reminder of the man’s versatility
and importance to the world of illustration far beyond comics. The
chapters on his work as a political cartoonist and then syndicator of
international editorial cartoonists shines a spotlight on his greater
contributions to the artform. The samples of his various syndicated
strips and editorial cartoons show a sharp intellect and fluid art style
that changed as necessary. This lavishly illustrated book concludes
with a section of portfolio images showing his skill with differing art
styles, photography and even prose.

Robinson is a national treasure for his work, including but far from
limited to the Clown Prince of Crime. Couch chronicles the artistic
career of the man with clarity and insight but falls short in making the
man himself come alive.