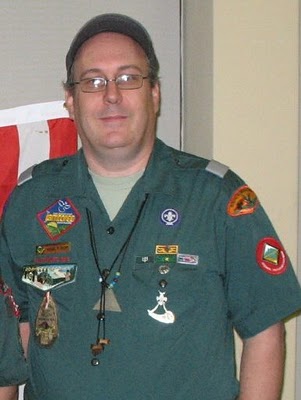 AP: Thanks for joining us, Michael! Can you start by telling us a little about you and how your interest in pulps began?

Sometime in middle school (late 70s) I stumbled upon Doc Savage. I believe it was “The King Maker”. The cover grabbed me. The titles of the other Doc novels grabbed me (they still do. those titles still have an unusual feel). I was soon looking for Doc novels in used bookstores. At some point I went after the Avenger, the Shadow (if I could find them), and started to read about the other hero pulps. (at the time reprints of them were hard to find. It would be years before I would find the paperback reprints of the other that had been reprinted).

Another pulp field I got into was the writing of HP Lovecraft, tho much later. I had first heard of them in my sf reference books. But it wouldn’t be until the mid-80s that I finally got his works and started to read them. A sort of related author I also got into was Manly Wade Wellman.

Today, thanks to several publishers like Altus Press and Sanctum Books, I am finally getting the chance to read some of the hero pulps I had know about, but never had the chance.

AP: What classic pulps are your favorites?

MB: As to classic pulps, there are several. I enjoyed the space opera yarns of EE “Doc” Smith, the works of Lovecraft and the larger “Lovecraft circle”, the southern Appalachian horror/fantasy of Wellman. When it comes to hero pulps, Doc Savage is still my favorite, with the Avenger a close second.

AP: Of the newer pulp characters and series, are there any you’d recommend?

MB: Not sure if I am as well read with some of the current “neo-pulp” hero series, but there are several I have enjoyed. The Rook is a series I have been enjoying very much. I have the latest on order and look forward to it. Art Sippo’s rework of Sun Koh is very good. He’s done a good job of transcending the characters original origins. I have enjoyed many of Tom Johnson’s works. There are probably other good characters and series out there I just haven’t had the chance to read. And not sure if you include pastiches in this group, but I am been enjoying Wayne Reinagel’s “Pulp Heroes” series greatly. Black Coat Press’s “Tales of the Shadowmen” series is also great.

AP: There’s been a lot of discussion lately about pulp hero revivals. Can you tell us a little bit about what you think on the subject? Do you prefer a more faithful revival or do you support significant modernizing of the concepts? Feel free to mention specifics from Moonstone, First Wave or elsewhere.

MB: Here is my take on it. At present I have been reading the First Wave. What I know of Moonstone is what I’ve read on-line, I have yet to read their comics. I have also read some other neo-pulp works, such as the use of pulp pastiches in the “Planetary” comics and Brubaker’s “Incognito” series.

Now, if one wants to do more modern takes of the characters, I rather the author create either wholly original, or pastiches, and use those. This is what Brubaker did in “Incognito”, creating pastiches of Doc & the Shadow, and using them in his modern hero pulp work. And I really, really enjoyed that. I didn’t have to be upset that he ruined these characters, because he created new ones. AND the fact that he included some great articles on the originals by Jess Nevins shows me that he had more respect for the source material then Azzarello et al does.

Now, one should also mentioned some of the written revivals of some characters being done. Airship 27, Moonstone and to a degree Wildcat is doing this. I’m more familiar with Airship 27’s stuff, and have enjoyed what I have from them. Unlike what we are seeing with First Wave, we are seeing works by authors who are pulp fans. So we are seeing more faithful works.

I should also say that I think in some ways some of the ‘techno-thriller’ authors are in some ways writing a new genre of ‘pulp hero’. I got into reading Cussler’s Dirk Pitt because he was likened to Doc Savage. Ron Fortier calls Preston/Child’s Agent Pendergast a modern Shadow. Authors like DuBrul, Dirgo, McDermott, and others are in some ways writing characters that would have been larger then life pulp hero adventurers back in the 1930s.

AP: In terms of the future of pulp, what things would you like to see more of? Are there things going on that you’d like to see a bit less of?

MB: When I got into the pulp fandom world in the 80s, it was hard to find out other fans. Most fan publications were of poor quality (production & reproduction, not quality of writing). I think that the combination of the Internet plus “print on demand” has really changed things. You are now able to reach out to fans thru websites, blogs, etc. You are able to get your product out to people better. You can now have one-man publishers (like Matt Mornig at Altus) putting out great pulp reprints, studies, and new stuff with a quality that’s as good as any major publisher. And he’s not alone.

If there is one thing I’d like to see is more coordination between some of the publishers. If Altus Press puts out a complete reprint of Doctor Death, do we really need Pulpville Press to later do the same (which they did)?? That seems a waste. Pulpville should have put their energy into a different work that no one else has done. If Airship 27 is putting out a book of NEW Jim Anthony stories, why are they not cross advertising with Altus Press who is putting out a reprint of the original Jim Anthony. As a pulp fan I want to read the originals before I embark on the new stuff. Thus I don’t plan on delving into Airship 27’s “Black Bat” collection until I get Altus Press’s collection of original Black Bat stories and can read some first.

And I guess one thing I’d like to see less of is crap like DC’s First Wave and people like Azzarello involved in the neo-pulp world.