ALL PULP thanks Peter Miller – docsavagetales.blogspot.com – very much for providing this Guest Review AND a Creator Interview to go with It!
Mystery Men #1 and #2 of 5
Written by David Liss
Art by Patrick Zircher
Published by Marvel Comics 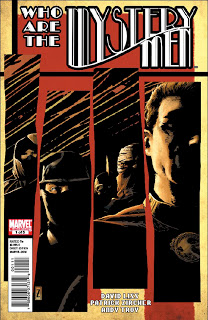 DC comics made a big splash when the First Wave Universe premiered. They were making pulp comics in a new way. Not set in the past, not set in the DC Universe, but set in their own universe. They hyped it as cel phones and airships. What they created, combining pieces of the past—Doc Savage, the Avenger, The Spirit—with non-super-powered DC characters like Batman and the Blackhawks, was a failed mess. In most of the books the world seemed just like our own except for an extra airship or two. The best book was the Spirit, but even Spirit fans didn’t seem to love it.

Now Marvel has taken a stab at New Pulp and I think they are on to something great. Mystery Men takes place in New York in the regular Marvel Universe in 1932. As far as I know, this is the earliest a series has been set in the MU. The heroes (thus far) are not super-powered. The villain, however, is another story. He exudes occult mystical powers.

Also involved in the case is another masked hero, the Revenant. He looks a bit like Moonknight and acts like the Shadow. He seems to have gotten the corrupt NYPD on his case and after crossing paths with the Operative, he decides they should work together.

The Operative doesn’t want the help and the fact that the Revenant is black doesn’t make it any easier, but we know they’re getting together. Issue #2 introduces the Rockettrix (not her real name, but the best description) with ties to the murder.

David Liss has nicely tied together a trio of pulp characters that I want to see more of. The story is good so far and the characters are charming, crude, tough, fascinating, and believable. I like the book a lot so far. Hopefully sales will be good enough to have the title continue.

I haven’t mentioned the art yet. The art is GREAT. Patrick Zircher’s style feels right for the period, but is modern at the same time. The entire first issue is done with horizontal panels, giving it a very cinematic style. The art is clear and direct and reminds me a little bit of Steve Bryant (Athena Voltaire). That is a compliment, by the way.

The second issue continues with the horizontal panels, but does break them up a bit. The colors by Andy Troy are also excellent, clean and subdued, but with color motifs to help define locations.

The final page of each issue so far has been an essay. Issue One’s article is by the writer, David Liss, and he discusses the thrill of adding to the beginning of the Marvel canon. He relates how he decided that the social issues of the 1930s would not be glossed over—that racism, sexism, poverty, and worker’s rights would play a part in the narrative. They do, and I think he has used them in his story well.

In the second issue, artist Patrick Zircher discusses the design path of the character’s looks.

I really hope these essays continue.

Go out and buy this great bit of New Pulp, you won’t be disappointed. 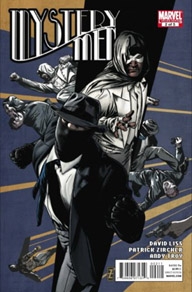 The first two issues of Mystery Men are out and they are terrific. The essay at the back of the first issue tells a bit about the genesis of the project, but I was wondering about your background with pulp and the history of the 1930s. Had you studied the era or was this an excuse to do just that?
It really was more of an excuse to learn about the 1930s. Over the years I’ve read various things from and about the period, and, of course, there are films. Like anyone who enjoys comics, I have always found a lot to love in the pulp era, but this was my first serious creative engagement with the period.

Have you read much original pulp of the era? If so, what titles or characters are you familiar with?

I’ve read a lot of pulp crime over the years, and I’ve read most of Robert E. Howard’s Conan stories. I have not actually read that much of the primary heroic pulp, though I have read the original stories of some characters like Doc Savage and the Spider. And then, of course, many of these characters have ongoing legacies in comics and other media that I’ve read.

Are you aware of the “New Pulp” movement – contemporary authors writing new stories set in the classic pulp era?

Yes, I have several friends who have contributed to some of these new pulp anthologies, and I have another new pulp project of my own in the works, though I can’t yet talk about it. I love the revival.

So far it seems that the 3 main characters – The Operative, The Revenant, and Sarah Starr have no innate super-powers. The villains do. Will we be seeing super-powered heroes in Mystery Men?

Hmm. Best to stay away from spoilers, but I will say that the amulet the General is after is packed with all kinds of surprises.

How did you go from writing historical mystery novels to comics?

I was asked! Marvel editor, and pulp-enthusiast, Bill Rosemann read one of my books and contacted me to ask if I liked comics and would I be interested in writing them. The answer was yes & yes. My first project for Marvel featured the pulp hero, the Phantom Reporter.

Are you a long time comics reader or are you new to the genre?

I was away from comics for the period of time I was in graduate school, when I lacked the time and money for comics — or just about any leisure activity — but otherwise I’m a lifelong fan.

What titles or characters are your favorites?

Some of my long-time faves include Daredevil, Spider-Man, Punisher, Captain America, Batman, Superman, Legion of Super-Heroes & Martian Manhunter, but I’ve always followed the story more than the character. My investment has always been less in titles and individual heroes than which creators are putting together good comics, so I’ll read just about anything with a cool story.

What writers or artists excite you?

On the writing side, these days my favorite creators are probably Robert Kirkman, Mark Millar, Brian Bendis and Ed Brubaker. I feel like I’ve been very lucky, because in my projects at Marvel I’ve been paired with some of the best artists out there. Francesco Francavilla and Jefte Palo, who have been doing the art for Black Panther, are both fantastic. And then, of course, there’s Patrick Zircher’s phenomenal work on Mystery Men. In terms of detail and beauty, as well as art that advances character and story, Patrick’s work on this book is about as good as it gets.
Share