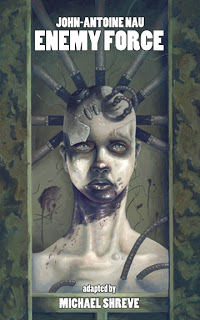 This month: three science fiction “classics”, plus another kindle/epub release.

John-Antoine Nau’s 1903 ENEMY FORCE has the distinction of having been the very first novel to receive the prestigious Goncourt Literary Award in France. The author was a rather eccentric surrealist/poet and the novel is indeed quite surreal: its protagonist is a poet who’s been committed to a lunatics asylum by his family, following a nervous breakdown.  He appears quite sane, except that he suddenly is visited, even possessed, by an entity from outer space, an intelligence from a rather fantastic and hellish planet orbiting Aldebaran. Is the entiry real, or is it a manifestation of the narrator’s insanity? The novel ends with one final twist on whether what we have been told is real or not. A rather odd, and yet interesting book, translated by Michael Shreve with a cover by Nick Tripiciano. 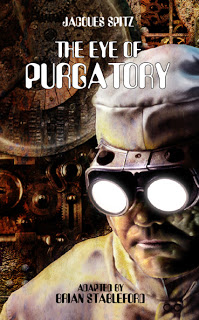 In the history of French SF, Jacques Spitz is the bridge between Renard and Rosny on the one and, and René Barjavel and other writers of the 1950s, probably the last great French SF writer to not have been influenced by American SF. Brian Stableford has translated two of Sp[itz’s novels, DR MOPS’ EXPERIMENT (1939) and THE EYE OF PURGATORY (1945). Both are very Wellsian in concepts and deal with the ability to see through time; in the first novel, a character can peer into the future at an accelerated rate (leading to the usual quandaries about whether one can change what’s to come); in the second novel, the protagonist sees not the real future but an increasingly aging present, leading to unique visions of decay, death and beyond. One is somewhat reminded of Thomas Disch or JG Ballard. The cover is by Spanish master Juan Miguel Aguilera. 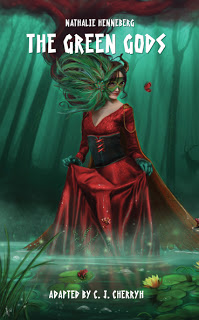 Nathalie Henneberg’s colorful, flamboyant THE GREEN GODS (1961), which takes place in a future, post-cataclysmic Earth where men must fight both intelligent plants and giant insects to survive, was translated in the late 1970s by award-winning CJ Cherryh for DAW books. This book reprints a slightly reedited version of Cherryh’s translation as well as several other hard to find Henneberg stories previously translated by Damon Knight, and a comprehensive Henneberg biography.  Henneberg was compared by DAW to Abrahan Merritt, but I think a comparison with Tanith Lee might be more appropriate. The cover is by French artist Anne Claire Payet. 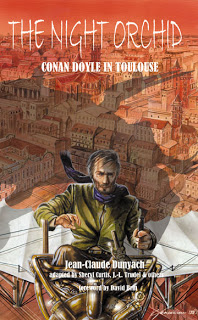 Finally, we are pleased to announce our second kindle/epub release: after last month’s release of Jean-Claude Dunyach award-winning collection of SF stories THE THIEVES OF SILENCE, we are releasing Jean-Claude’s earlier collection, THE NIGHT ORCHID (subtitled “Conan Doyle in Toulouse”) in that format. Jean-Claude is not unlike a French David Brin (who kindly wrote the intro to NIGHT ORCHID) and one of France’s best contemporary SF writers.