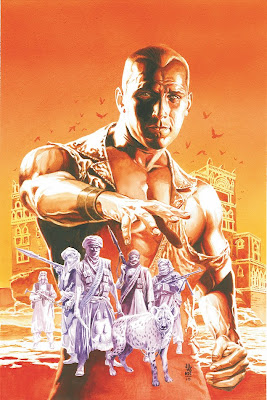 DOC SAVAGE #9
Written by IVAN BRANDON & BRIAN AZZARELLO
Co-feature written by JASON STARR
Art by NIC KLEIN
Co-feature art by SCOTT HAMPTON
Cover by J.G. JONES
Doc’s adventure in the war-torn Middle East takes a nasty turn when he realizes that the people who sent him into the Zone don’t necessarily want him coming back out. Meanwhile, the threat he came to neutralize is not what it seems!

And in the JUSTICE, INC. co-feature, there’s nothing standing between Smitty and his quarry, the murdering scum he plans to pay back in kind – but what will become of him if he breaks Benson’s cardinal rule? “Murder and Vengeance” concludes here!
On sale DECEMBER 8 • 40 pg, FC, $3.99 US 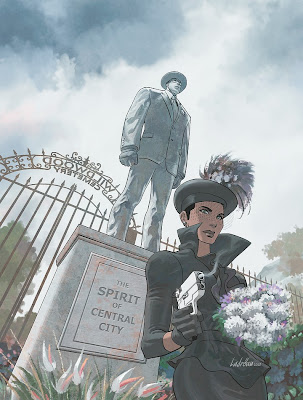 Written by DAVID HINE
Co-feature written by PAUL DINI
Art by MORITAT
Co-feature art by MIKE PLOOG
Cover by LADR÷NN
The Spirit knew there was something suspicious about the relationship of mafia heir Ophelia Ottoman and no-good loser Jimmy Bauhaus, but he didn’t know that the secret they kept could pit Central City’s crime families against each other! But that doesn’t mean he’s going to let Ottoman get away with murder. . . does it? Say it ain’t so, Spirit!

And in the co-feature, THE SPIRIT: BLACK & WHITE, Paul Dini and Mike Ploog have a holiday gift for you: the tale of an extremely bad Santa – a crook haunted by the Spirit of Christmas everywhere he turns!
On sale DECEMBER 15 • 40 pg, FC, $3.99 US