ALL PULP INTERVIEW-Paul Malmont-Writer
AP:  Paul, it’s indeed a great pleasure to have you sit across the ALL PULP table today for this interview.  Would you mind to share a little bit about yourself? 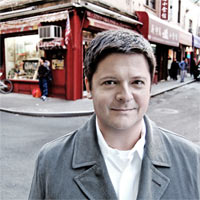 PM:  Thanks.  I’m a copy director at an advertising agency in New York.  I live in New Jersey with my wife and two little boys.  My new novel about the birth of the science fiction pulps, THE ASTOUNDING, THE AMAZING, AND THE UNKNOWN, comes out in July.
AP:  You’ve definitely done a bit of work that falls within the realm of pulp and taking the concept of pulp a couple of different directions.   What about pulp appeals to you as a fan and as a writer?
PM: What I’ve tried to do is take some of the conventions of pulp (the freedom of heightened realistic fantasy, outrageous topics taken for granted, outlandish characters, crazy plot devices) and apply them to the sensibilities of literature.  I think literature is flagging because books aren’t fun to read anymore, I’m trying to borrow from the pulps, the things that might make a big book fun.
AP:  Let’s get to the meat.   Your name first became known to many readers with the release of your novel THE CHINATOWN DEATH CLOUD PERIL.  First, can you sum up the book for our readers, including who your main protagonists are? 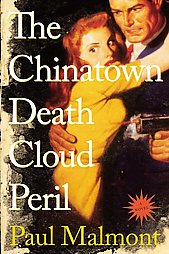 PM: DEATH CLOUD takes two real writers from the hero pulp era, Walter (The Shadow) Gibson and Lester (Doc Savage) Dent and casts them in an a story that hopefully captured some of the elements they used to write about.  It’s also a top-to-bottom overview of the pulp industry at that time, introducing the reader to everyone from H.P. Lovecraft to L. Ron Hubbard.
AP:  What inspired you to take the best writers of pulp fiction and turn them into pulp heroes in their own right?
PM: I always like that time period and the pulp atmosphere and it always influenced my work.  Then I read an Isaac Asimov biography and he mentioned hanging out with Hubbard.  I realized I knew so much about the era, but Hubbard would be that little something extra that really pushed the story over the top.  It all kind of fell into place after that.
AP:  You’ve talked about a follow up, maybe not so much a sequel, to PERIL.  What can you share about that?
PM: My new novel THE ASTOUNDING, THE AMAZING, AND THE UNKNOWN takes places in 1943 and focused on a couple of DEATH CLOUD characters, Robert Heinlein, Hubbard, and adds Isaac Asimov and Sprague de Camp.  It really is about how the industry and world had changed so quickly from the events in 1937.  The hero pulps were doing a fast fade and sci fi was in ascendency.  It’s less atmospheric and more straight-forward, as suits that style of story-telling.  Gibson and Dent do appear again.  But it’s different.  Whereas DEATH CLOUD was about the redemptive powers of the imagination, and JACK LONDON was about the destructive powers, this one is about whether there are any limits to imagination. 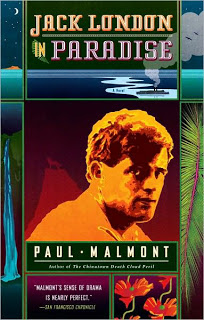 AP:  Your latest novel, JACK LONDON IN PARADISE, deals with an author that many would say wrote works that fall within the pulp genre and he definitely influenced many pulp writers and literature as a whole.  Can you tell us about this book and then discuss why you focused on the particular point in his life that you did?
PM: Jack London inspired most of the writers who were writing pulps by the ‘30s.  If not in style then they modeled their careers on him—he was the first writer to figure out how to make a living writing for magazines.  And his writing was so transformative that all the magazines wanted his type of stories, so they started giving opportunities to other writers, and before you know, you had an industry.  His life itself was so incredible, and he lived it so hard, that it just lent itself to a novel.  Add to that the fact that there was an incredibly romantic center and some mystery to his very young death, and it became a very satisfying challenge to take on.  In a lot of ways, it’s a spiritual prequel to DEATH CLOUD and ASTOUNDING.
AP:  You also were the initial writer of the DOC SAVAGE comic in the FIRST WAVE line from DC.   First, what was it like going from writing novels to having your stories translated into images on the page?
PM:  Writing a DC comic was something I was able to cross off my bucket list. Who doesn’t want to see their name on a DC comics?  Having said that, writing for comics is a very different medium than for literature, or even film—it has rules I’d never even thought of.  So it was difficult, but rewarding. 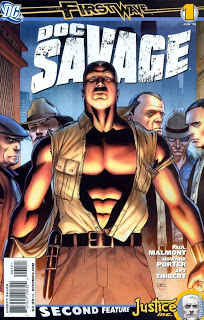 AP:  What sort of editorial restrictions or pressures were you under while writing DOC SAVAGE at DC?  Did Editorial have a specific direction in mind and if so, did that agree or conflict with where you felt the book should go?
PM:  There was a bible to follow, of course, but within that I was given a lot of freedom.  But they rejected my first draft outline and went for the second.  I wanted to get more into Doc’s head and background a little more than I was ultimately able to.
AP:  There’s obviously been a lot of negative fan response to the FIRST WAVE line, particularly from fans of the characters in their original forms.   What are your thoughts on this reaction, primarily being that DC is not remaining true to the concepts as they were conceived and is even going beyond tweaking them, outright changing some of them?
PM:  I think one of the inalienable rights of a fan, be it sports, movies, comics or something else, is that of complaining about how things weren’t done right and should have been done better.  I do it myself all the time.  I would have liked the fans to get behind it more, but what can you do?  I don’t want to make it seem like it’s all on the fans, or on me—I think there is some design inconsistencies throughout the various First Wave books that are confusing.  I remember pointing out that I didn’t think the cars in my first issue looked like the cars in the FW debut issue, and was told not to worry about it.  There’s perhaps more editorial consistency in the writing than maybe there is in the visual direction.  I can tell you that, as a Doc fan, I’m pleased with what I wrote and that by issue 3 it was really clicking along and there were big things ahead.
AP:  What other pulp characters would you like to get a shot at, if any, in comics?  What about prose, any interest in penning any particular classic pulp hero in a short story or novel?
PM:   I love magic so I’d love to get my hands on Captain Marvel or Doctor Strange.
AP:  Anything in the near future you want to make sure our readers look out for?
PM:  THE ASTOUNDING, THE AMAZING, AND THE UNKNOWN is available in July.  My collected run of DOC will be out in trade paperback in April and hopefully fans will take a second look. I’ll be at Comic Con in San Diego.  I can be found on twitter- @pmalmont.  And my Facebook book page is http://on.fb.me/f8q7zw – please join.  We’ll be giving away advance copies and making other announcements soon.
AP:  Paul, please come back anytime and visit with ALL PULP!
PM:  Thanks!
Share