TIPPIN’ HANCOCK’S HAT-Reviews by Tommy Hancock
BLACK BAT DOUBLE SHOT REVIEW-PART TWO
Writer-Mike Bullock
Artist-Michael Metcalf
(NOTE-This review is for the second of two stories in this issue. A review of the first story has already appeared on ALL PULP! Just click REVIEWS and scroll down! 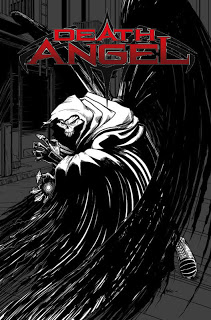 Death Angel
Pulp writers today walk a multitude of slippery slopes and fine lines. They have to be careful when dealing with established characters not to tick off hardcore fans and also not to alienate new readers. It’s even more hazardous when introducing a new character into the Pulp genre. Writers run the risk of being accused of being derivative if their creation is too similar to a pulp icon or, even worse, they get accused of not knowing what in the tommy guns they are doing, trying to shoehorn a modern idea into the pulp world.
The creators behind the DEATH ANGEL story in the second half of Black Bat: Double Shot, Moonstone Books, walk that slope. And they do it really, really well.
Death Angel, an original creation of the book’s creative team, Bullock and Metcalf, is a vigilante with a horrible visage and a dedicated mission to see justice done. As violently and as bloodily as possible. Although some would argue that the character looks to be more modern in appearance than some might like their pulp characters, make no mistake. If artists of the past could have gotten away with it (and some arguably did), then there would have been some really scary lookin’ good guys back in the day. 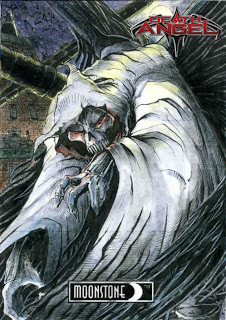 The story is very fast paced, dealing with a new drug on the scene that essentially drives the user insane. Death Angel encounters a couple of these junkies and deals with them swiftly and savagely, but Bullock works in character development in this cyclone of a tale as well, with a literal ‘behind the mask’ moment, one that may surprise people who didn’t read the Angel’s debut.
The art is solid, stark, and insane. The line work is tight, yet at times, particularly when Death Angel uses some of her devices, the word ‘psychedelic’ could be used. The story moves along like a freight train out of control and out of track. It’s hindered a little by its own speed, moving almost too fast to be understood and enjoyed in a single reading. Overall, however, Death Angel’s story in this double shot stands up well against her companion, The Black Bat, and is a welcome denizen of the night seeking justice in the pulp genre!
Four out of Five Tips of Hancock’s Hat (usually reserved for heads of state, arresting officers, and little old ladies, which is pretty darn good.)
Share