AP: Ed, welcome to ALL PULP and to Moonstone Monday!  Tell us about yourself, some personal as well as professional background?
EC: Sure, thanks for having me!
I’m a marketing professional and have spent my career building brands such as OREO, Snuggle, Chips   Ahoy!, Lysol, KIA and Napa.  But I’m also a long-time comic fan, and have worked with Marvel, DC, Valiant and Reed Expo’s New York Comic Con developing strategy and marketing initiatives.  Developing Captain Action Enterprises, LLC, with my partner Joe Ahearn, seems a natural extension of both my marketing skills and my passion for comics.
AP: What is your involvement with Moonstone Books?
EC: We shopped our first property, Captain Action, around a bit when we were looking to develop the new comic series.  Moonstone was really the best place for us to find a solid partner committed to working together to build an engaging series.
We work closely with the whole Moonstone team to develop our series, manage the monthly ebb and flow of producing the comics, and to develop new initiatives. Examples include our digital relationships with ComiXology and Panelfly and our new partnership with Overdrive, the group that manages digital comics and books for libraries worldwide. Some of the other programs have been more straight forward, like the enamel/cloisonné pins we created for The Phantom and for Captain Acton.
We’ve been thrilled with our partnership with Moonstone. It’s been a great place to be creative and work with fantastic talent.  And now our titles with Moonstone are growing to include Zeroids, Savage Beauty, Lady Action and Captain Action Classified, the new 60’s series featuring the “original” Captain Action. 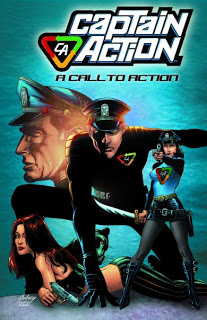 AP: Captain Action seems to be your primary property. Can you give us some background on Captain Action as a character?
EC: After the success of G.I. Joe, Stan Weston created the Captain Action toy line for Ideal.  Just as G.I. Joe could change into an army soldier or an astronaut, Captain Action could change into superheroes.  Originally he could change into a plethora of heroes including Spider-Man, Captain America, Batman, Superman…even The Green Hornet and Buck Rogers.
On the very basic level, Captain Action is all about imagining the possibilities of oneself.  The idea is that “you can be anything you want to be” but always tempered with “being yourself is pretty cool too.”  We try to bring that into our Moonstone series.
He has a rich cast of characters too, including his arch-enemy, Dr. Eville, his sidekick, Action Boy and his amazing amphibious car, the Silver Streak!
AP: Can you talk about the process of how you came to be involved with Captain Action on a business level?  This is also probably a good place to have you explain the term you use on your facebook page to refer to yourself..Just what is a retropreneur?
EC: Our company, CAE, LLC is based on the idea of taking old properties that still have appeal or a nostalgia value, polishing them up and getting them out there once more – both for original fans and a whole new audience too.
So –we’re kind of entrepreneurs with throwback/retro perspective. We get a lot of positive feedback when we offer our business cards to folks and they see Retropreneur. It’s a little whimsical, but it’s memorable!
AP: Why Moonstone for Captain Action?  What about Moonstone appeals to you to help get the legend of Captain Action out to the masses. 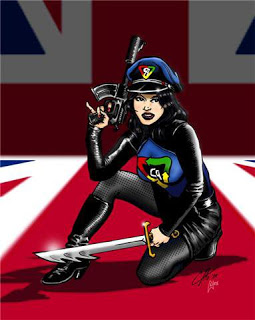 EC:  Moonstone has been a great place to serve as a launch pad for many of our own ideas, but publisher Joe Gentile also provides great guidance and insight.  Plus, he’s a tireless worker, so there’s always a sense that he’s working hard for us and our books.  The Moonstone extended family, with Dave Ulanski, Lori G and the whole crowd, including solid folks like Marshall Dillon have been a joy to work with.   And Mike Bullock, the Phantom/Black Bat/Lions, Tigers and Bears writer, has been a great compadre.  We worked with him on our Phantom/Captain Action miniseries and are working even more closely developing our upcoming Savage Beauty Series!
Moonstone’s also a publisher with a big tent. We’re publishing a superhero comic, and robot/Zombie/Sorority Girl comic and a jungle comic..and they all seem to fit perfectly under the Moonstone banner.
In 15 years, Moonstone’s been good and honest with creatives too.  So when we call up our favorites to say, “Hey, wanna work with us”, they know that Moonstone is a reliable outfit.
AP: How do you make a concept like Captain Action, one that started as a toy decades ago, relevant to the modern audience?
EC:  We ask ourselves that every day. And I’m not sure if there’s an easy answer. But we’ve worked hard to  be true to the characters, while finding fresh voices and innovations.  We want to keep the core of what made the toy interesting in the first place (otherwise, why bother with it?) and yet spin it out so you’ll be pleasantly surprising the old fans and still providing engaging, welcoming entertainment for new fans.
AP: Do you have any other projects with Moonstone currently? 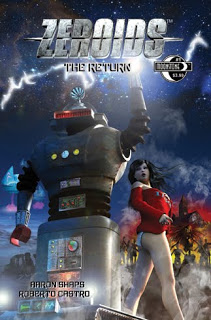 EC: Zeroids was another Ideal property from the sixties. They were a sort of early Transformers – robots from space.   We’ve brought that back with a vengeance. The first issue just met huge critical acclaim and the second issue will be out in about 2 weeks.   Then we’ll continue on in 2012 with an ongoing Zeroids monthly comic.    For this one, we worked with writer Aaron Schapps to create a SciFi mash up of several concepts, including robots, zombies, aliens and, of course, sorority girls.  In fact, the series real protagonist is a college sophomore named Destiny Zero. She has sort of a Dorothy-in-Oz relationship  to the Zeroids!
After that we have a Captain Action Winter Special! And what a special this is! It’ll include:
A classic Captain Action tale of a beautiful French double-agent and a communist Yeti penned by Beau Smith and expertly rendered by the great Eduardo Baretto.
1.       Lady Action in “The Spy Who Snowballed Me” by our favorite British madman, Tony Lee with art by Reno Maniquis.
2.       For the first time ever, Green Hornet will team up with Captain Action in a prose story by Matthew Baugh.
3.       Covers are by Mark Wheately and Ruben Propocio – it’ll be a quite a package.

Then we’ll debut Savage Beauty in February! This is a re-imagining of the old Jungle Girl Comics, but with a modern day twist.
Starting with a generous sneak peek at New York Comic Con, we’ll be inviting readers to take a walk on the wild side with Savage Beauty, our new comic series that tells the stories of sisters Lacy and Livvy Rae. This series focuses on their travels throughout modern-day Africa as they are called upon to help right wrongs, protect the innocent and punish evildoers. As reporters for Africa Adventures Online, the Rae sisters are guided by the mysterious Mr. Eden to assume the identity of the mythical goddess Ayana. Disguised as this “Savage Beauty”, the two girls fight modern-day pirates, hard corps militias, corrupt politicians and various other real-world adversaries torn from today’s headlines.

Savage Beauty will take you on an exciting journey as the Rae sisters discover their purpose in life, even as they make a real difference in the world.

Plus the comic book series intends to make a difference too – each issue will donate a full page to partner causes such as Oxfam, Just A Drop and Invisible Children, among others.

And our first issue will be oversized, with a Savage Beauty story, a classic reprint of the first Jungle Girl – Sheena, and special features including lost promotional art to 60’s Raquel Welch Jungle Girl movie pitch…and we’ll be offering it all for just $2.99.
And future covers read like a who’s who of comics – Paul Gulacy, Mark Wheately, Dave Hoover, Chris Short and even a few non-traditional surprises!  Series write and co-creator Mike Bullock has a long list of hot stories that we can’t wait to publish.  We’re really excited for this project! 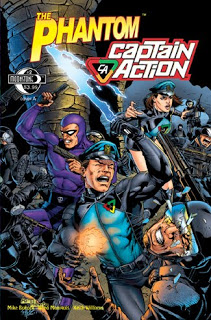 So much else going on too: Our Phantom-Captain Action Hardcover is coming out and it looks gorgeous.  Wait till you see the wonderful John Byrne cover on issue #1 of Captain Action Classified. Future storylines in that title include a Berlin Wall story with Nazi’s and LSD, and a story that features the Beatles in Paris right before their historic Ed Sullivan appearance.  And be on the lookout in November when that British Bombshell, Lady Action appears in the prose collection of short stories in the anthology: Chicks in Capes, edited by Lori G!  Look for the lovely Nicola (Wonder Woman/Secret Six) Scott cover!
And convention-wise, we have two more this season. I’ll be a guest of Honor at the 35th Annual Ithacon in Ithaca, NY September 25th, and then we’ll have strong presence again at booth #2380 at New York Comic Con October 8-10th.
AP: What is the appeal of reviving old toy characters/lines and giving them new life in the modern era?
EC:  In one sense, it’s a big-boys-big-toys kind of thing.  We like to play with entertainment properties and get down to their essence, and then build them back up again in an engaging story.
In another sense, it’s what every kid does with every Imagination-based toy. They make their own story up. We’re doing just that- with a talented group of collaborators- and it’s a great challenge to put it out there and see if anyone likes it! 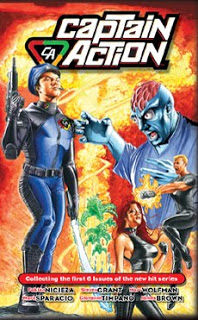 AP: Any future projects you care to let the ALL PULP pulpsters in on?
EC: Our biggest news isn’t quite ready yet, but it’s so very, very close. We’ll be making a big toy announcement soon – hopefully before New York Comic Con – that both new and old fans will be jump-out-of-their-seats excited about!
AP: Thanks a lot, Ed!
EC: It’s been a pleasure – thanks for having me!
Share