Webcomics You Should Be Reading: “The Gutters” 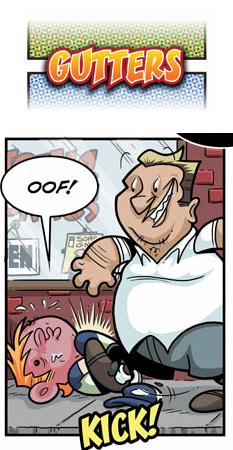 Gentle reader, I know it’s been an eon and a half since last I told you to dust off that bookmark button. But to be honest, I’ve been buried in the same set of webcomics for a long time now, with nothing piquing my interest as such… until now. Found literally by happenstance, I bring to you today a webcomic that is not like any other I’ve brought to you thus far. I bring to you… The Gutters.

Produced and written by Ryan Sohmer, the same dude that puts out a former Webcomic You Should Be Reading, Least I Could Do, The Gutters is truly a unique webcomic beast. Instead of a singular cast, The Gutters uses today’s comic books as fodder for content. Expressing a gripe about “One More Day” or “Blackest Night,” or offering a more general comics in-joke, the strip skewers just about everyone in the industry… fictional or not! Instead of a single artist, The Gutters employs the services of a multitude of industry pros. Past strips has been drawn by the likes of Eugene JjAR, cartoonist Chris Jones, comic book guru Bill Sienkiewicz, and webcomic god Scott Kurtz. Even Least I Could Do‘s Lar deSouza lends his hand on occasion. At the end of the day, the combination of a rotating art cast with Sohmer’s wit and criticism of the comic industry equals a damn funny webcomic that had the Unshaven Comics crew doing spit takes while we roamed through the archives. Although the comic is only 40 strips old, it offers a gold mine of jokes.

Normally, I peruse the wikipedia of the “About Us” page to pick up a little backstory. Sadly, The Gutters is far too new and awesome to have garnered an entry yet. From what I can glean from the blogs, though, the project is pretty straightforward. According to Sohmer:

“In brief, Gutters is a series of standalone pages that parody the
comic book industry and the heroes and characters that dwell within.
Think of it as an editorial cartoon targeting comic books, and you’ll
understand where we’re going with it.

While I’ll be writing Gutters, Lar will be the art director with Ed
Ryzowski serving as colorist. As for who will be doing the actual art,
well, that’s where things get interesting (and slightly different).
Rather than have one artist pencil each page, we elected to have a
rotating roster of professional artists, among them some giants in the
comic book industry alongside new and emerging talent. This way, in
addition to what I hope will be a humorous comic, Gutters will also be
an ongoing showcase of art.”

As always, allow me now to provide you with a selection of some of my personal favorite gems from the archives. Click, and be prepared to laugh your arse off.

And now for the lightning round! Er,I mean the breakdown:

So there you have it… another Webcomic You Should Be Reading. Now, go do yourself a favor and start reading it. But do it in another window. I’d hate to see you leave ComicMix.