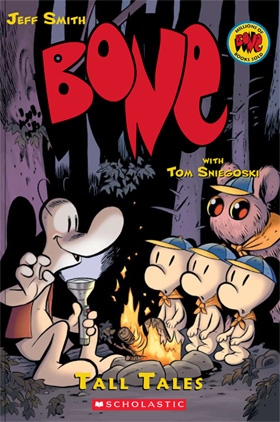 Scholastic’s Graphix imprint is wisely repackaging all the [[[Bone]]] material, turning it into a uniform library for the young adult readers who can’t get enough of the denizens of Boneville. The latest such entry is[[[ Tall Tales]]], which is the color edition of 2000’s [[[Stupid, Stupid Rat-Tails: The Adventures of Big Johnson Bone]]],[[[ Frontier Hero]]], which in turn collected a 1999 miniseries. The key differences are that “RIblet” is not included here while a story produced for the late, lamented [[[Disney Adventures]]] magazine is added along with some new material.

Additionally, the versatile Tom Sniegoski penned three of the four tales collected here with Smith handling the honors for the framing sequence and the first story. Essentially, Smiley and Bartleby take Ring, Bingo and Todd camping and tell stories around the campfire. So, the frame is set post-Bone and the stories themselves are all prequels.

In all cases, they are delightfully told stories with all the usual drama, action, and humor one can expect from the Bone universe. Steve Hamaker once more colors the stories and does his usual superb job, making this a valued addition to the line.

The first story is a quick one-off while the second, “Old Man Winter” tells of Johnson Bones’ exceptional birth, followed by “Big Johnson Bone vs. the Cobbler Gobbler” where the great adventurer may have met his match. All of which establishes the resourcefulness of the legendary figure. He was prone to long, exaggerated tales but also showed a resourcefulness that gave credence to his abilities. About half the book is taken up with the final Tall Tale, “The Lost Tale of Big Johnson Bone”, establishing why rats do not have tails.

After Bone, his mule and talking monkey are caught in a twister, they find themselves in a valley filled with sentient, avaricious rats. They also find several other animal lifeforms that have been subjugated by the rats, including Stillman, a dragon unable to breathe fire. Once he convinces the animals here’s there to help, it becomes a battle of wits between Big Johnson Bone and Queen Maud. There are some twists and turns but you pretty much know how it will end and are entertained every step of the way thanks to skillful storytelling from Smith and Sniegoski.

By all means, pick up this wonderful collection and enjoy the stories.