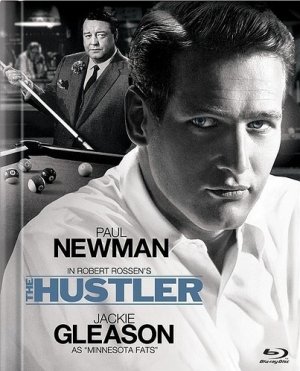 Far too films hold up to the test of time, their iconic nature re-evaluated through a modern prism and found wanting. Memorable performances or screen characters suddenly look one-dimensional or wanting. Then there are those that grew in stature through the years as audiences and critics catch up to the creators’ vision. Those are the ones that are hailed in retrospectives, make it to the National Film Registry and get the deluxe treatment when released on home video. The Hustler, the 1961 film about pool and people, is one such film and is this week making its Blu-ray debut courtesy of 20th Century Home Entertainment.

It used to be, pool sharks could tour the country, play high stakes games and eke out a living of sorts. Legendary pool players had a word-of-mouth reputation every bit as powerful as celebrities made famous by ESPN. The great novelist Walter Tevis captured these players and their world in his 1959 novel, prompting Robert Rosen and Sidney Carroll to adapt it to the big screen.

“Fast Eddie” Felson is the wandering pool player, with no roots, no life beyond the end of his cue stick. He arrives in the small, dark town of Ames specifically to challenge the legendary Minnesota Fats – and loses. What happens next propels the rest of the film and becomes a study of pool players, friends, and lost souls searching for a better way.

Felson is a brilliant player but empty inside, yearning for something more but not sure what that is or how to get it. All he knows is he’s the best and wants to prove it time and again so being humbled by Fats rankles. And while he’s lost, he discovers there are others who don’t know just how lost they are, a point made when he meets the drunken Sarah Packard.

These are rich characters and Rossen wisely cast selectively, waiting for Paul Newman to be available to play Felson. He was the right age and had the right look for the drifter. Paired with Jackie Gleason, they were as different as night and day. Gleason, coming off years of celebrity hosting his own variety show, is a revelation, playing a dark, somber figure, who is every bit as cunning and slick as Felson. Gleason did his own pool shots as witnessed by how Rossen framed his scenes, making it all the more authentic.

Rounding out the rich cast is Piper Laurie as Sarah and George C. Scot as Bert, Fats’ manager, and Myron McCormick as Charlie, Felson’s partner.  There’s more to the story than just pool and the movie takes its time, unlike today’s offerings, building up situations and letting the characters breath.

The movie was deemed too long by critics of the day but it still was nominated for nine Academy Awards, winning two. Newman lost out as leading actor, an oversight corrected in 1986 when he got the Oscar reprising Felson in The Color of Money.

The film transfer is crisp, the award-winning black and white cinematography successfully conveying mood and atmosphere. This movie actually works better because of the black and white stock used and the audio is fabulous. All previous DVD extras from the various incarnations are still here along with a few new pieces making this well worth owning. First up, there’s a 27 minute Paul Newman at Fox featurette focusing on his work for the studio. Gleason gets a similar 12 minute piece, reminding us that the multi-talented performer was an underrated star. Someone dug up a nearly 19 minute radio interview with Tevis that provides some additional insight into the novels and its characters.