There has been a lot of buzz lately about creators walking away from cushy contracts at Marvel and DC to strike out on their own, the most recent being Paolo Rivera whose eloquent blog post on the subject offers wonderful insight to his personal motivation.

The reaction from fans and comic related news media would make you think that these creators are venturing to the dark side of the moon on the first experimental space vessel not built and commandeered by NASA. This reaction mystifies me because it shows a disregard of the history of comics and the vibrant atmosphere of the current comics marketplace.

People that are surprised that top rated talent are leaving the Big Two should rather be asking, “why has it taken so long?”

The pros and cons of working for corporate comic companies have been established for decades. 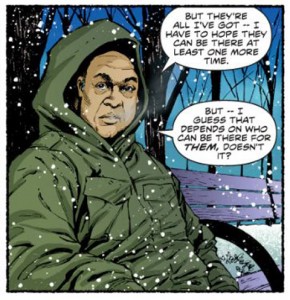 Sure, you get to work on characters you know and love, there’s a steady check so long as you are a hot commodity, maybe some benefits, maybe some royalties, oh and the exposure to Marvel and DC‘s huge fan base can elevate you to star status. But in the end you own nothing, you had to be careful to create only within the parameters of the existing universes or run the risk of watching a character you created make beaucoup bucks for the corporation while you get nothing in return and, when you are no longer hot or are out of favor with the editing staff, there is no work and you live as a pariah.

There was a time when working in comics was the most loathsome career path for a writer or artist. Lousy page rates, no royalties, rights or recognition. You worked in comics merely as a stepping stone into advertising, television or film. This was true until the sixties when Marvel, or more accurately Stan Lee, made working in comics seem almost glamorous. The money got a bit better and creators began imagining actual careers in the field. By the late seventies creators began to realize that even though their names were plastered all over the books, they were still not getting much in return for their efforts and especially their unique creations which were now wholly owned by the corporation they worked for.

Creator’s eyes were fully opened in 1978 when the first Superman movie was released and they watched Jerry Siegel and Joe Schuster battle for morsels of the enormous profit generated by the character they had created and sold for $130 nearly forty years earlier.

It became clear that there was a deficiency in the business model of the comics industry. Why was it necessary for the comics publishers to fully own the copyrights and trademarks of all the intellectual property they published? Other book publishers do not operate this way and neither do other forms of entertainment where royalties and residuals support creators long after their work is created. Don’t get me wrong, there are good and bad contracts  everywhere necessitating the need for lawyers and agents but it sure is nice to have the opportunity to negotiate your terms.

The success of the Underground Market in the sixties and the rise of the Direct Market in the late seventies created opportunities for comic creators to work outside of the traditional corporate confines of the comic industry. Creators, disgruntled by the usual terms with which they worked at corporate comic companies, turned to the successes in these markets and began to strike out on their own. Many targeted the Direct Market that had established a secure venue for such properties as Jack Katz’ s First Kingdom, Dave Sim’s Cerebus the Aardvark, and Richard and Wendy Pini’s Elfquest. This defined a new model where creator’s could find success owning their own characters and marketing direct to the distributers with the benefit of minimal risk provided by guaranteed pre-orders and a no-return policy.

Alternative publishers took note and began contracting creators defecting from the corporate comic companies, offering creator owned contracts that included fair page rates, and royalties. The eighties opened the door for true creators rights and as the alternative competition gained a foothold in the industry, the corporations  began offering publications that were vehicles for creator owned properties and they structured some type royalty arrangements.

Since the inception of the Direct Market there has always been an opportunity for creators to have alternative options. Marvel and DC, however, have maintained  a strangle hold on the Direct Market which they control by sporadically flooding the market with superfluous content in an effort to successfully drive out or contain alternative publishers. There have, however, been a few exceptions where talent has been able to break free with enormous success and plenty of other instances where independent creators have had comfortable, rewarding careers by most standards.

The Direct Market is no longer the panacea it once was for comic creators who now realize how easily the market can be manipulated by the Big Two and the near monopoly of its primary distributor.

Fortunately the internet has provided a wide open space for creators to play and have direct access to the customers themselves. Print on Demand providers and affordable, minimum-quantity print runs has eliminated most of the upfront risk of comic production and crowd funding has created an avenue for advance orders establishing revenue streams.

Competition is brisk and there are more comic creators than ever before, presenting a huge variety of unique creations that go well beyond the constrictions of the superhero genre. The distribution of digital content for mobile devices is giving comic creators the opportunity to reach new markets that just a year or two ago may have seemed impossible.

This is possibly the best and most challenging time to be a comic creator ever.  Working for a corporate comic company is now a choice, not the only viable option if you intend to have a career in comics. Corporate creators have a better understanding of their role as  cog in the corporate wheel and are more careful as they juggle being creative without abandoning rights to personal creations.

Corporate comics are once again a stepping stone to a respected career but creators no longer need to leave the comics industry. They just need to declare their independence and take control of their destiny as comic creators.

The revolution to establish these freedoms for comic creators has spanned decades. There have been many victories and many casualties. Alternative companies have come and gone, creators have basked in the limelight then vanished from the radar. Some have celebrated success while others have anguished over failure. Through it all it has been the audience that has benefited the most, paying witness to a variety of comics that would never exist if they were limited only to the corporately owned IP of two publishers.Next week, as a nation, we celebrate the independence of the United States of America, a country that established freedoms and inalienable rights that did not exist prior to the signing of the Constitution. Those same rights grant us the opportunity as comic creators to freely express ourselves through our work and to pursue a free and open market. As a comic creator, take a stand  and be independent. As a comics fan, support independent, creators and publishers.

As a comic community declare every Independence Day as Independent’s Day and applaud a bright future for the art of creating comics.

Thirty years ago as two of the co-founders of the alternative comics publisher Comico the Comic Company, Bill Cucinotta and I were focused on these same ideals. Through Comico we had many triumphs yet succumbed to tragic failures.

We never lost the dream.

This Fourth of July weekend we will celebrate our third year in our new publishing incarnation as CO2 Comics. We will be rejoicing our continued freedoms as Independent Publishers, armed with technology that did not exist thirty years ago, experience, and a continued love for comics. Our Declaration of Independence will be the announcement of three new print publications that will be immediately available to our readers. 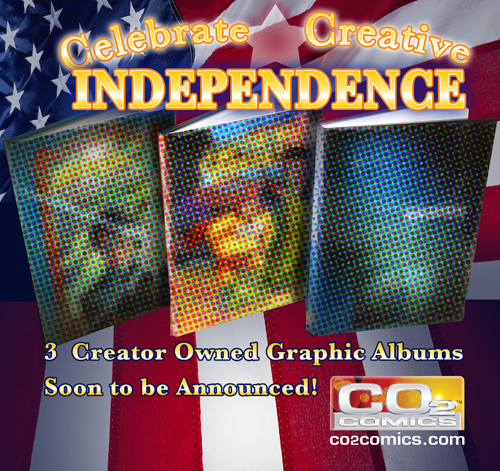 We know how exciting it is to publish comics beyond the walls of the corporate comic companies!

So next time you hear about a comic creator’s exodus from the corporate comic world just remember, “it ain’t anything new.” It is an opportunity created by the efforts of many over many years.  Show your support, buy their comics and celebrate their independence!