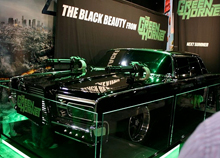 Trailers and photos are beginning to leak out from the most disparaged unreleased movie of the year.

We’re finally seeing something from Seth Rogen’s Green Hornet movie, set for release next January. Already, that’s a bad sign – usually, big deal action flicks are released in summer or around Christmas, and Green Hornet was moved back from this summer into an all-but-invisible slot.

The stuff that’s been released is, of course, the really cool stuff. There’s nothing that says this is all the cool stuff the movie has to offer, but we always have that sneaking suspicion. Seth doesn’t look too bad– sort of plumpish Michael Keaton as Bruce Wayne. And Jay Chou looks like he
can handle the martial arts. It other words, there was nothing to chase me
away, like in the Spirit and Jonah Hex trailers. And there’s at least one thing that’s really cool-looking.

That would be the car, Black Beauty, after which they named the powerful amphetamine. It looks great. It damn well should; it might be carrying the movie. But… can it act?

I’ll probably see The Green Hornet for at least three reasons. The villain is being played by Christoph Waltz, of Inglourious Basterds fame, and he stole that movie, dropped it on me, and performed a lap dance. Edward James Olmos is playing hard-edged reporter Mike Axelrod, the man out to
expose the Green Hornet to impress his publisher, who also happens to be the Green Hornet. And long-time comics artist Arne Starr is in the movie, in a bit part but still, it’s always cool to see friends in the movies.

But I am most certainly not sold on The Green Hornet. At least, not yet.