Women Is NOT Losers 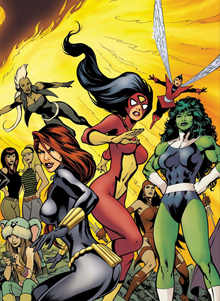 Marvel Comics is a couple months into their “Women of Marvel” promotion, and that raises an issue or two. The whole idea is fine – honor… well… promote the several hundred female characters that toil in the Marvel Universe. Remind the readers
that many are among Marvel’s best. After all, women-starring superhero comics generally don’t sell very well and women-starring superhero movies are, without fail, failures.

I realize there’s a reason why the movies flop. Most of them really suck. Supergirl, Elektra, and Catwoman deserved better. But they stunk up the box office so badly I doubt they’d make a Black Widow solo movie
right now even if Scarlett Johansson had a half-dozen nude scenes.

Well… I could be wrong about that last point.

But the fact is, these are just made-up characters. It is
not intrinsically harder to write, draw, direct and/or act as a woman superhero as it is a man. I understand avoiding crappy movies, but a lot of the women superhero comics are as good as anything on the racks. Given the growing percentage of women readers, you’d think there would be a chance here.

So kudos to Marvel for their promotion. And go to your friendly neighborhood comic book shop and take a super-heroine out to lunch.

ComicMix
editor-in-Chief Mike
Gold performs a weekly two-hour Weird
Sounds Inside The Gold Mind ass-kicking music and blather radio show on The Point every Sunday at 7:00 PM Eastern,
replayed three times during the week (check the website for times). Likewise,
his Weird Scenes Inside The Gold Mind political
and cultural rants pop up each and
every day at the same
venue. Thanks to Janis Joplin for the headline.