Review: ‘The Book of Eli’ 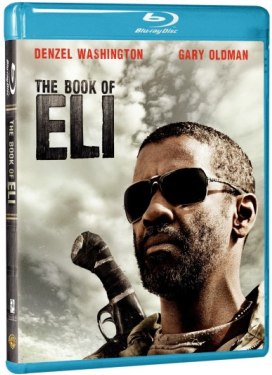 Those of us who make their living using words can fully understand how a good book can motivate people. Some of the worst fictional scenarios have involved totalitarian societies banning or burning books so the notion that The Good Book was blamed for global annihilation is a powerful notion. The burning of all bibles in the wake of some near-future event is the spark that propels the compelling [[[The Book of Eli]]]. Out tomorrow from Warner Home Video, the movie is available as a combo pack (Blu-ray, Standard, digital copies).

Written by Gary Whitta, we’re never given much detail about life before the war but we pick up 30 years later and see rural American society struggle to survive. There’s nothing about an American government let alone any sense of what is happening beyond the borders since everyone is worried about that most precious of commodities: water. People have resorted to scavenging and bartering under the bleak skies, while modern day highwaymen prey on the weak.

Strolling through all this is Eli (Denzel Washington), a man on a mission. For years now, he has been headed west because he heard a voice telling him to head there, protecting his precious cargo: the last known copy of the Bible. When he arrives in a small town, trading KFC handwipes for a battery recharge and a pair of winter gloves for a refilled canteen, Eli comes to the attention of Carnegie (Gary Oldman). They are men of a certain age, elders compared to so many others, able to read and are literate. Carnegie has forged a small government, using brute force to keep the peace and try to restore some semblance of society. All along, he has roving bands of brigands seeking a Bible, so when it becomes clear Eli is carrying a copy; he wants it at any cost.

He tries bribery, even sending Solara (Mila Kunis), daughter of Claudia (Jennifer Beals), the blind lover to Carnegie, to bed Eli, who rebuffs her advances. Solara finds him fascinating and begs to learn of life before the “Flash”. When Eli manages to leave town, she follows and in time he accepts her as his companion, recognizing his job is to protect and teach her.

Eli is a quiet man, but cross him and he becomes a tornado of violence, using hands, feet and a large knife to dispatch any physical threat. How he was trained and what made him such a deadly accurate shot and archer is never addressed. Given that he was on “a mission from God” it could be chalked up to divine intervention.

The play between Eli and Carnegie which forms the spine of the film is well handled by both Whitta and the directors, The Hughes Brothers. Carnegie is driven to obtain the Bible so he could harness its power to restore some semblance of society while Eli is out to protect it at all costs. Both remain convinced of the correctness of their actions making both men interesting figures. There are some twists in the final act which I won’t discuss but was pleased with them and felt they added something mythic to the overall story.

The disc comes with about an hour’s worth of extras including talking heads on what it would mean for American society to be Starting Over. Eli’s Journey is a production featurette that shows how the story evolved and how the comic art was rendered for the film. A useless featurette was a look at The Book of Eli Soundtrack. Edwards provided the art to [[[A Lost Tale: Billy]]], a motion comic of sorts exploring Carnegie’s childhood. There are just a few deleted scenes which don’t add much to the film itself.

Overall, this is a thought-provoking tale that could have used a few less repetitive fight scenes and just a tad more character and backstory. By all means, you should be checking this out.