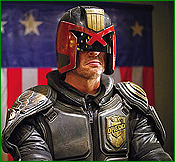 Mike Gold: So. How did Dredd 3-D compare to the first attempt?

Martha Thomases: So much better! Karl Urban looked the part. The set, while not looking like the comics, had the gritty spirit of the comics. And the violence was terrifically cartoony.

And no Rob Schneider, although I did think he was the best thing about the first one.

Mike: Back in 1995 I went in to the theater with really low expectations, given the Sylvester Stallone / Rob Schneider leads. They managed to live up to those expectations. This new one had enough blood to make Sam Peckinpah gag, but I dug it. It was meaningful blood.

I admire Urban playing true to the character and never taking the helmet  off. Sly put his money right there on the screen. Sadly.

Martha: Urban kept his face still and his voice growled. I can remember the other characters. The kid who worked the computer for the bad guys has stayed in my mind. Those eyes. Dredd 3-D reminded me of Escape From New York more than Peckinpah.

Lots of solid special effects with the eyes. It was a signature thing with this movie. I liked how both women leads looked like they had been drawn by Ian Gibson, which was exactly the right thing. The growling was right on target, although I’m afraid some people will think he was imitating Batman.

Martha: I also liked the way the women weren’t played as sexy femme fatales nor damsels in distress. None were there to be love interests, not even Judge Anderson. Although in a society where everything is filthy and no one can get a close shave, I am impressed that they take the time to pluck their eyebrows.

Mike: This one was very faithful to the comics, both in tone and in detail. You’re right about the cityscape, and the blocks looked more realistic (and less ironic) than in the comics.

They really understood their source material… maybe because the 2000AD publisher co-produced it. The dog wagging the tail, as opposed to the Warner Bros. approach.

Martha: I couldn’t tell when it went from real to matte/CGI. The city looked quite believable.

Martha: But a naked Dr. McCoy would be a delight! 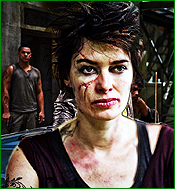 Mike: Yeah, that’ll be in Star Trek 2.2 for sure! Just to feel Spock’s indifference.

I did flash on how cool it would have been to have Joan Jett as the villain, but Lena Headey was absolutely great.

Martha: I don’t know who should get the credit for Urban’s performance. It was very flat, which is exactly right. Kind of show-offy in a non-show-offy way. I assume the director told him to do that.

Mike: Judge Dredd dominates. Unlike the comics, he can’t be unrealistically one head taller than everybody else so his performance had to make it seem that way. Given how everything was covered up except for his jaw and mouth, all he had to work with was his voice. Which came off great.

Martha: If I have a problem, it’s the McGuffin made no sense. It’s a drug called SloMo, which slows one’s perception of time. If you’ll living a wretched slum, why is that something you would want to do?

Although taking a bath on SloMo sure was pretty.

Mike: I agree with that, although heroin is much the same way – except you also get to distance yourself from your lousy reality. But it worked well for the big finish.

Martha: It worked for the torture threats, too. Made the bad guys seem really, really bad.

Mike: I think the middle of the movie was too drawn out. When Steven Moffatt wrote the Rowin Atkinson Doctor Who, he said the show was about chase scenes through endless corridors. In Dredd 3-D, they seem to think this was a good idea.

Martha: I kept thinking video games. I thought we going to have to go through all 200 levels.

Mike: The outrageousness of the early Dredd stores has since become commonplace in our culture. It lost all its shock value. And as much fun as that was, I think they were smart to avoid that today. It would have turned the movie into a comedy. But without Rob Schneider.

Mike: Yeah, I hope it does well enough for a sequel. Not too sure about that, although the reviews weren’t universally horrible. Two-thirds were at least fairly positive.

What did you think of the Real 3-D?

Martha: It made the SloMo parts really pretty.

Mike: This is the new second move – ever – where I liked the 3-D effects, the first being The Avengers. This was actually better. But those middle scenes lacked ‘em, making them even slower for me.

Martha: Otherwise, it was subtle enough that I focused on the movie.

Mike: Good point. The gimmicks should never outweigh the story or the performances. Just try telling that to George Lucas.

Martha: The sparkle in the SloMo 3D is the only reason I could imagine the drug was any fun.

Mike: So, kids, just say no to drugs unless you’re in a 3-D theater. ComicMix cares.

Mike: Yeah, well, personally I’m not a big fan of that animation style. This makes me very lonely. And they’re a waste of Randy Newman’s considerable gifts.

Martha: We will have to agree to disagree about that.

Martha: A bunch. I would recommend it. I hope it does well so Box Office Democracy covers it. I should warn you that I did not hate the TotalRecall remake, so my opinion might not matter.

I would certainly recommend it to action movie fans and absolutely to comics fan. I think my response is about 90% of yours.

Martha: I would be interested to know how this movie is received by those who don’t know the comic.

Mike: I will be interested to see how it does in the UK as opposed to North America.

What are you looking forward to next?

Martha: I want to see Looker. I still haven’t seen The Master. And Bond. James Bond. The Man with the Iron Fists. Django Unchained. Cloud Atlas – the new Wachowski film. I am a social butterfly!

Mike: The trailer for Iron Fists was great, although you already warned me. It’s made by Michael Davis’s buddy Rza. And, yeah, as always I’m looking forward to the next Bond. Us baby boomers and our James Bond fetish.

That Ben Afflick movie Argo looks interesting. Then again, I’m hoping he’s in Avengers 2 as well. Or Captain America 2. Just to piss the hardcore off.

Martha: I love Ben. I even loved Jersey Girl.

I find that, if there is a theme in my movie preferences of late, it’s that I like to see cute guys in peril.

Mike: Damn. So Daniel Craig is cute? He doesn’t do that much for me. But M…

Martha: Is she in peril in the new one? I think the new Q is adorable.

So, yes, I think all ComicMix readers should go see this… if only to participate in this discussion in the comments.

Mike: Ever vigilant about the page hits! I agree, on both subjects. Thanks, Martha! We’ll see you here next week!