Review: ‘The Invention of Lying’ on Blu-ray 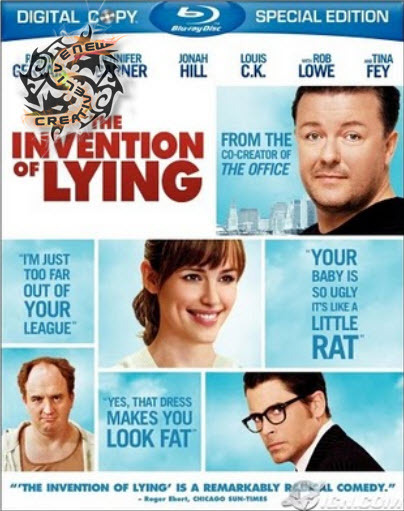 Ricky Gervais is a terrific writer and comedian but since the success of [[[The Office]]], he has struggled to fully realize his ideas in the limitations of a motion picture. Last year’s Ghost Town had terrific ideas that weren’t fully explored and the same fault spoils [[[The Invention of Lying]]] from being a more satisfying movie.

Stuck writing about the 13th Century, Gervais apparently has struggled to make the Dark Ages interesting and is fired by his weak-willed boss (Jeffrey Tambor). Low on cash, he can’t pay the rent, until he suddenly is inspired to tell the Bank Teller that he has more money in his account than the computer records. Beginning here and throughout, the lie is never challenged, never verified, so he tells people things and they accept it on face value. Skepticism seems missing in this reality as well.

When his dying mother (Fionnula Flanagan) fears the great void of an afterlife, his newfound gift provides him with the words he needs to comfort her. Those overhearing him believe he knows things they do not and embrace the newfound truths. The world beats a path to his door, demanding to know what he knows. In one of the best scenes, Gervais composes ten rules about the Afterlife, tapes them to two pizza boxes and arrives bearing the equivalent of the Ten Commandments.

As his romance with Garner evolves, the movie loses track of how the world changes based on these new rules. A series of newspaper and magazine headlines give us a glimpse but it’s a missed opportunity. Instead, we focus on the odd triangle of Gervais, Garner, and Rob Lowe with Garner struggling to decide between optimal genetics or someone who will make her happy.

A humorous romantic comedy is spoiled by Gervais’ unwillingness to really see how things change as he becomes the world’s first liar. The unrealized opportunities would have made this a far richer and more enduring movie instead of this mildly entertaining bit of floss. Gervais surrounds himself with terrific comedians such as Tambor, Tina Fey and Jonah Hill then gives them nothing to do. Gervais is aptly cast in a film he co-wrote and directed. Garner is sweet in her simplicity and watching her evolution is one of the few highlights although is totally predictable.

The Blu-ray edition looks and sounds sharp, not that it needs to be at its best. The extras are a rich assortment, beginning with a nearly 18 minute feature on a Brit pal coming to America to appear as an extra in a scene that wound up cut and is included in the deleted scenes. The scene, the dawn of man, comes complete with narration from Sir Ian McKellen. Among the 13 minutes of deleted scenes we see some glimpses of a larger world but the cuts aren’t necessarily missed. A Truly “Honest” Making-of Featurette provides 7 minutes of humorous asides and not much real information. Better is the gag reel and forgettable are the four video podcasts. Following their new format, this comes complete with a digital copy.