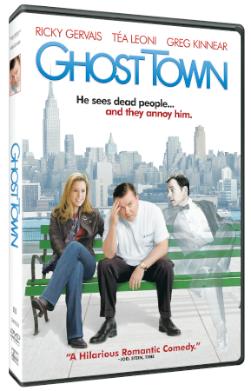 There is something seemingly irresistible to combining romance with ghost stories.  Since the talkies began, moviemakers have told stories of lost-loves as either romantic comedies or dramas.  Every few years you get one that works on every level and becomes a popular classic such as [[[Ghost]]].  When they don’t work, you get [[[City of Angels]]].

[[[Ghost Town]]], the first significant romance since that latter film, falls somewhere in between.  Co-written and directed by David Koepp, this is a creative stretch for a man best known for his work on [[[Indiana Jones]]] and [[[War of the Worlds]]]. His premise, co-written with John Knapps, is a good one.  Dentist Bertram Pincus (Ricky Gervais) goes in for a routine colonoscopy but insists on general anesthesia and during the procedure he died for seven minutes before being revived.  Upon leaving the hospital, Pincus suddenly can see the ghosts who still walk the streets of Manhattan, ghosts with unfinished business.

Pincus, someone who generally has withdrawn from human contact after a disastrous romance gone bad years earlier, is suddenly besieged by the spirits begging for his help.  The only one who successfully gets through to him is Frank Herlihy (Greg Kinnear), who lived in the apartment directly below Pincus and is worried about his wife, Gwen (Tea Leoni), about to marry another man.  The budding antagonistic relationship between spirit and misanthrope forms the spine of the film as Pincus slowly learns to re-engage with the world.

Gervais, as usual, is a delight to watch being uncomfortable in his body and dealing with others.  Kinnear treads a fine line between being sympathetic and unlikeable (his character, after all, cheated on Gwen).  And Leoni softens at all the right times but her character doesn’t feel full formed and three-dimensional.

That’s the problem with the film.  There are lots of little bits to like but so much of this becomes predictable so you can see what happens long before it unfolds on the screen. The ghosts who all want his help have way-too-easily solved problems although one who has a surprising connection to Pincus offers a nice touch.

Koepp brings on the Greek ghost chorus to make Pincus feel overwhelmed or guilty or for cheap laughs.  Then they vanish for long stretches so we can focus on Pincus and Gwen.  These people seem so desperate, you ask yourself why did they back off and let just Frank get through to the dentist?  Questions like that rob the film of its ability to become truly entertaining.  It’s a fine date flick and certainly plays well on television but it’s eminently dispensable.

The single disc, on sale today, comes with a handful of perfunctory extras including commentary, a Making Of, and a set of bloopers that shows how much fun everyone had making the film.  It also shows how hard Gervais has to work to pull off his deadpan persona.