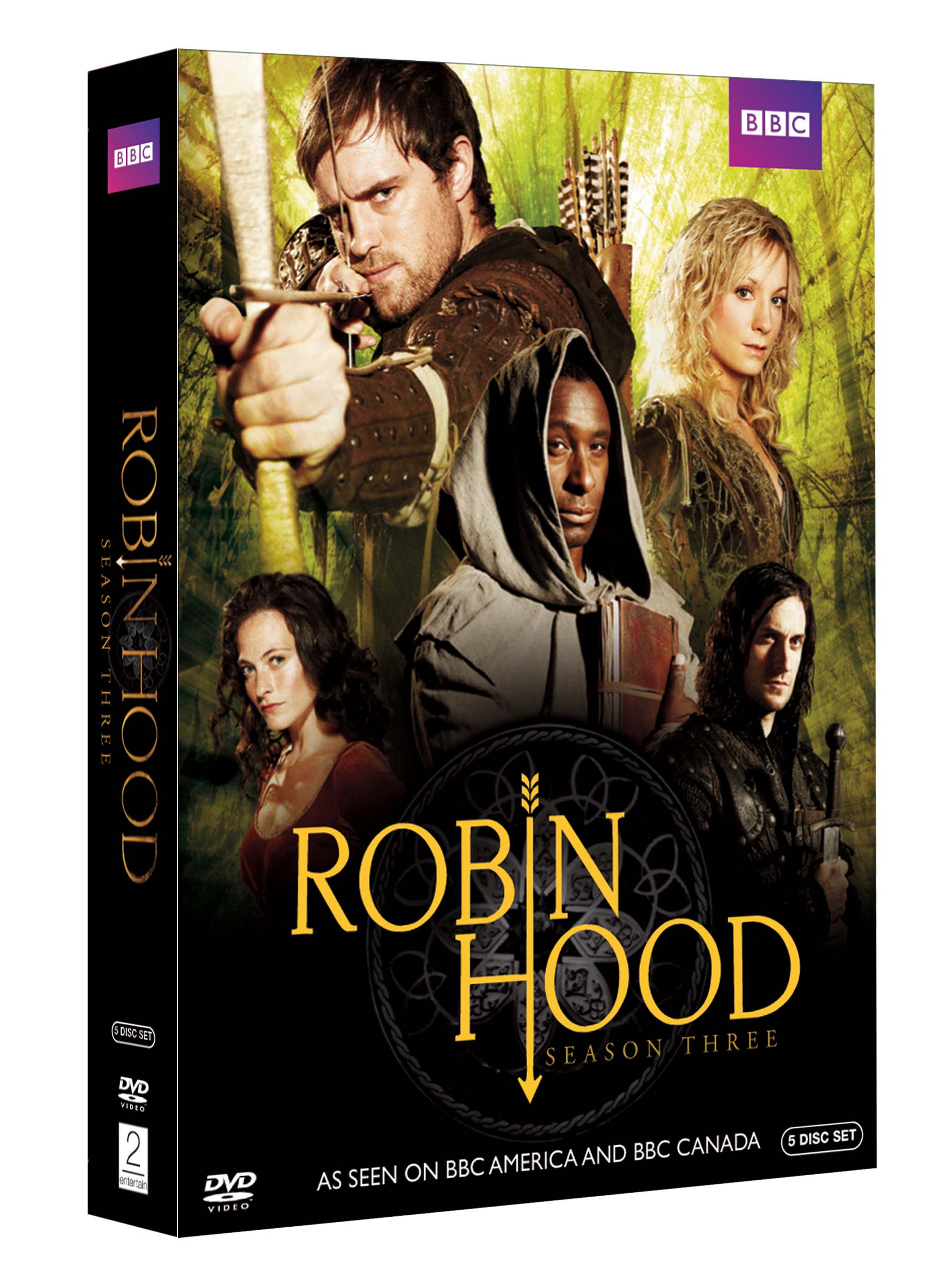 BBC’s retelling of the [[[Robin Hood]]] legend began in 2006 and quietly ended in 2009, never quite living up to the hype and expectations. The series was incredibly anachronistic and its budgetary limitations were clearly evident throughout its 36 episodes. When the series was good, it was highly entertaining and when it was less good, it was tolerable.

BBC Video has just released the third season on DVD in the states so if you missed it on BBC America, here’s your chance to see for yourself how it all wrapped up.

The series began teetering during its second season, especially when Lucy Griffiths chose to leave the show and they killed Maid Marian, making for a major departure from the legend. Then we heard that Robin himself, Jonas Armstrong, announced he was leaving after the third season. As a result, we began hearing them all chant “We are Robin Hood”, setting up the expectations that once Armstrong left, the Merrie Men would carry on, keeping his spirit (and the series) alive. The BBC went so far as to announce a producer had been asking for a fourth season revamp but the third season ratings changed their minds.

We open the third season with Robin and company returning from the Holy Land where Marian was buried. He’s still smoldering with hatred, wishing nothing more than to gain revenge against Gisborne (Richard Armitage) for his love’s murder. And here’s the problem, for two seasons now, Robin, Gisborne, and the Sheriff (Keith Allen) have all had one opportunity or another to dispatch the other, ending the misery. In every case, they back off or get thwarted and by episode 27, it’s gotten very tiresome. Similarly, I’ve lost track of the number of times the villagers have thought ill of Robin and the men when they know better. Then there are the anachronisms in dialogue to appeal to modern day viewers.

On the other hand, this season set up several threads that at least provided a more interesting spine to stir things up than the second season did. The arrival of Friar Tuck (David Harewood) and Gisborne being sent away to explain his failures to Prince John in person start things off nicely. The return of the Sheriff’s sister, Isabella (Lara Pulver) and seeing her replace her brother changed things up nicely. On the other hand, the later revelation that Gisborne and Robin shared a heretofore unknown half-brother, Archer (Clive Standen), doesn’t do anything but shift the focus away from the regulars.

And that’s been a consistent problem along with the earlier issue over the enmity between our hero and the Sheriff. The Merrie Men (Alan, John, and Much) have been ill-served with little time spent on their characters. They fight, get captured, get freed, argue, and bring supplies to the townsfolk. We never circle back to John’s wife and son or learn more about the others. The writers and producers certainly did these three actors (Joe Armstrong, Gordon Kennedy, and Sam Troughton respectively) a disservice. Also, the fun byplay between Robin and Sheriff from previous years is all but missing. If anything, the actor to really shine throughout the three seasons is Armitage who has been conflicted between his upbringing, his loyalty to the crown and the Sheriff, and the unrequited love for Marian.

The show builds up to a major climax, bigger than the previous seasons and actually adds a punctuation mark that nicely brings down the curtain on the series.

The five disc set comes with A Legend Reborn a self-congratulatory behind-the scenes featurette, A New Look (a nice piece on the costuming), a piece on the Trebuchet: Creating Chaos and video diaries that are mildly entertaining.

As this entertaining but less than satisfying series ends, we can turn our attentions to yet another look at the legend with the big budget Ridley Scott/Russell Crowe feature this spring.