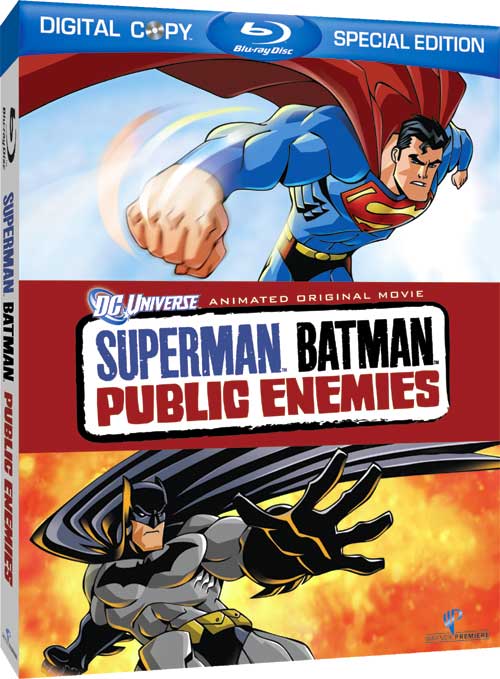 For the last 25-30 years, writers and artists have been having a wonderful time contrasting the differences between Superman and Batman. Prior to that, they were both happy-go-lucky super-heroes, brothers-in-arms with nary a problem twixt them. The team of Jeph Loeb and Ed McGuinness really explored the dichotomy between the icons in[[[ Superman/Batman]]], the modern day version of [[[World’s Finest Comics]]]. Their opening story arc, “Public Enemies”, was a major turning point in the DCU, bringing down the curtain on one set of stories and kick starting threads that played out across the line for several years.

Any storyline that involved, could not possibly be well-adapted to an animated feature considering the lack of context most viewers would need to have. As a result, [[[Superman/Batman: Public Enemies]]] the direct-to-DVD release from Warner Premier, now on sale, had to make some modifications. Unfortunately, they were not all for the better.

On the plus side, there are some nice bits between [[[Superman]]] and Power Girl who is the only other character in the story to possess a personality. The story moves at a nice clip and showcases both heroes fairly well, It’s a true pleasure to have Tim Daly and Kevin Conroy voicing the major heroes with Clancy Brown back as the icy Lex Luthor. The animators also do a fine job taking McGuiness’ pumped up style and bringing it alive.

A major plus is that this continues a line of animated features based on today’s DC Comics, demonstrating that good characterization, good storytelling and mature themes can be presented in an entertaining manner for fans of all ages. Yes it’s violent and yes the attempts to destroy, kill and maim the Dark Knight and the Man of Steel aren’t positive themes, but good continues to triumph over evil, working up a sweat to do so.

WIth Luthor as president, it changes the playing field in the struggle between Lex and Superman. Suddenly, as Commander in Chief, he possesses even greater resources to call upon and even uses the Oval Office to sway public opinion. A kryptonite meteor coming to Earth? Must be affecting Superman so he can no longer be trusted. The changed dynamic means battling Luthor has to change, too, and that’s where the comic story works better than the film, which keeps things on the all-out-action level.

Loeb erred in many of the selections he made among the heroes and villains cobbled together to oppose the World’s Finest duo. For example, everyone knows Major Force is a murdering sociopath and the team should have rejected working alongside him. Starfire, an alien princess, and Katana are not American citizens and shouldn’t have answered President Luthor’s call. Similarly, when Captain Marvel shows up to duke it out, Superman brings up the wisdom of Solomon which should have counseled the good Captain to avoid this political mess. The animators also picked an overly broad collection of villains to arrive, controlled by Gorilla Grodd. They all got stopped way too easily, diminishing the threat any one of them possessed.

The movie feels big because of the cast and I wish there were more strong voices such as CCH Pounder’s Amanda Waller. It was probably a mistake for Alison Mack to be Power Girl because I kept thinking Chloe Sullivan.

The biggest oops was not having the Superman and Batman Families come to the heroes’ aid, demonstrating their contrasting styles. I’d have much preferred keeping it, ahem, all in the family, in lieu of the mindless slugfests at 1600 Pennsylvania Avenue.

Finally, there’s the notion that this genius Japanese kid was the only one on Earth able to construct a rocket able to stop the mammoth kryptonite meteor. Let’s see, there are various magicians, three [[[Green Lanterns]]], and so on. And in the film’s case, once the meteor is blown up, there’s nary a mention of what became of the now tiny chunks of kryptonite that were now hurtling towards Earth and other planets in the solar system. At least a line of dialogue should have covered that. At 67 minutes, there was definitely room to smooth over the story points.

Overall, though, this is a strong offering and fun to watch.

The extras on the Standard edition and the DVD include the usual assortment of trailers for other DCU videos, including the next one, [[[Justice League: Crisis on Two Earths]]], coming in 2010. The Blackest Night featurette also appears. “A Test of Minds: Superman and Batman” dos a nice job exploring the comic book relationship between the heroes while “Dinner with DC: With Special Guest Kevin Conroy” features the voice actor Voice Director Andrea Romano, Executive Producer Bruce Timm and DC’s overseer Gregory Noveck chatting the animation crew about adapting the film. Two Batman-featured episodes from Timm’s Superman: The Animated Series round out the disc. You have until September 30, 2010 to take advantage of the digital copy download, with no disc to aid you.