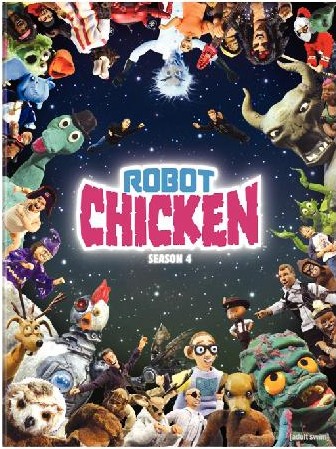 I don’t know how I missed [[[Robot Chicken]]] when it debuted several years back. I heard the buzz, I saw the ads in the comics and still, I somehow never got around to watching. When the Cartoon Network sent over their second [[[Star Wars Special]]] for review, I finally indulged and was delighted.

Now, they sent over the two-disc set collecting the complete fourth season, which goes on sale Tuesday, and watched with great delight. The season, which ran from December 7, 2008 through December 6 (last week!), has 20 episodes and the set also includes [[[The Robot Chicken Full-Assed Christmas Special]]].

The show is a riotous tour through the pop culture zeitgeist, presuming the viewers know the players from Tila Tequila to the torturous relationship between Thor and Loki. Many of the episodes are loosely connected vignettes while others feel entirely like a collection of whatever was finished in time got included. When handling a single theme, such as Christmas or [[[[Star Wars]]], they manage to make that work as well, with a broad array of talents coming together to keep things loose and very, very funny.

To me, many of the funniest bits shows the before or after events from favorite scenes such as the natives building the temple deathtraps we saw Indiana Jones avoid in [[[Raiders of the Lost Ark]]] or the day in the life of Jason Voorhees.

Seth Green and Matthew Senreich have certainly developed an eclectic following which has allowed them to bring onboard writers and performers to work with them. In fact, one of the best Video Blogs included in the Extras shows the range of actors who come in and let loose. I can’t decide who was having more fun, Billy Dee Williams or Katee Sackhoff. Among the writers to contribute, beyond the usual suspects from previous seasons is comic book darling Geoff Johns.

Back during [[[Star Trek]]]’s 20th Anniversary, there was talk of an Opera which was partially written before wiser heads canceled the project. But, thanks to one bit, we have a good idea of what it would have sounded like. The hysterical [[[Star Trek II: The Opera]]] is one of the highlights.

No, not every bit works and some episodes feel wildly uneven, but in
each episode I find myself laughing out loud at the absurd
juxtaposition of elements or seeing revered icons poke fun at
themselves.

No one and nothing is sacred to these creators so[[[ Babar]]], [[[Hannah Montana]]], [[[James Bond]]] and just about everyone else you’ve grown up with is fair game. The DVD presents the episodes without censorship so there’s additional graphic violence, nudity and many instances of foul language.

In addition to the 21 episodes, there are Chicken Nuggets (the creators offer commentary), appearances at 2008’s Comic-Con International and 2009’s New York Comic-Con plus when the team promoted the show across Australia. There are way-too-brief Day in the Life glimpses at the many talented technicians who take the wacky scripts and bring them to life. There are a handful of deleted scenes with introductory material to explain how anything manages to get cut plus deleted animatics, early tests showing how a script might look. If you like, the show, these Extras continue the entertainment and are commended to your attention.