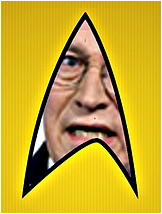 Social commentary is pretty old news in science fiction, so I guess we shouldn’t be surprised that it figures prominently in what will probably turn out to be the summer’s sci-fi biggie, Star Trek Into Darkness.

Of course, if we wanted to be picky, or display our erudition, or be just a bit passive aggressive, we could point out that superheroes are science fiction, and there’s already one of those, a mighty successful one, on our local screens and another, cape furled, is waiting in the wings. But we’re not picky, show-offy or, heaven forfend, passive aggressive, so we’ll just elide past everything in the previous sentence and soldier on to the Trek flick.

I’m not a trekker, not by a stretch, but I have seen all the theatrical movies and a (pretty paltry) sampling of the video iterations. And one element has always bothered me – not a big bother, certainly not a pleasure slayer, just a nag somewhere in the far regions of whatever it is that passes for my social conscience.To wit: the implicit militarism in the Star Trek mythos.

I saw my first television Star Trek in the mid-sixties, when I was hanging with peaceniks and was recently freed from two absolutely humiliating years aboard a warship – pity me, but also pity the poor bastards whose hopeless task it was to cram me into regulations – and I was pretty sensitive to military stuff. And here came Star Trek, which, being science fiction, I was predisposed to like, but they were all wearing uniforms, the crew of the Enterprise, and they often carried sidearms and the ship itself was equipped with a futuristic version of heavy artillery and they had ranks and those ranks had a familiar sound to them: lieutenant, commander, captain, admiral…yeah, I’d met guys who carried those designations. They generally hadn’t been my pals.

Maybe back when Star Trek was but a blip on the zeitgeist, whoever was running the show did have the military in mind. But the current movie makes a point of letting us know that Star Fleet is not a military command. The ranks? Civilian vessels are run by captains and are manned by guys in uniforms.Rank does not necessarily equal warrior: duh.

What most pleases me is that the villains are not, in the final reckoning, demonized – that is they’re not portrayed as aliens.No, the chief evil-doer is your ol’ buddy the authority figure. And this is where the movie accepts the burden of social commentary: I am not the first to observe that the plot of the story is a reflection of the past decade of our history. And allow me the amusement of imagining that one character’s name on the first draft of the script might have been Cheney.

Because I’m writing these words on Memorial Day, and I have no wish to disrespect either the holiday or those it commemorates, let’s be clear: we should support our troops by giving them the equipment they need and by properly tending to their wounds and by granting them the benefits they’ve earned,and mostly by not sending them to be slaughtered in useless wars.