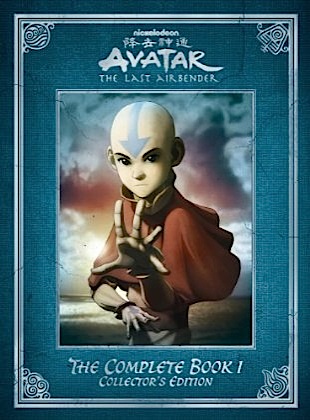 If you’ve been to a movie theater in the past five months, chances are you have seen a trailer for M. Night Shyamalan’s live action version of [[[Avatar: The Last Airbender]]]. If you’ve been in the audience for a family friendly film, you’ve probably also heard many parents and kids excitedly buzzing about the trailers. But if the trailers for the major motion picture are all you know of The Last Airbender, you’re really missing out.

My kids and I were first introduced to the series, which originally ran on Nickelodeon from 2005-2008, when a friend sang it’s praises as a wonderfully engaging show that was appealing to both kids and adults. The series, created by Michael Dante DiMartino and Bryan Konietzko, follows a boy named Aang, the last-known airbender (person with the ability to manipulate the element of air) who is also the Avatar – someone who has the power to master all four elements – who is discovered by a brother and sister from the Water Tribe and sets out with his new friends (along with a flying bison inspired by Miyazaki’s catbus) to defeat the war-hungry Fire Nation from destroying the world. My kids loved it, and it quickly became a household favorite. We also soon discovered that many of our friends were fans of the show, as well.

Now, in anticipation of Shyamalan’s film, Nickelodeon is releasing a shiny new collector’s edition of the first season

, which goes on sale June 22nd. In addition to having the entire, completely awesome first season, there are special features and bonuses-a-plenty. The set comes with two exclusive bonus discs, along with a preview edition of the upcoming book Avatar: The Last Airbender – The Art of the Animated Series (which was released on June 15th). The book has a wonderful collection of concept sketches and descriptions of character development for the series. My kids squealed with delight when they saw the book and actually sat together nicely for over an hour to look at all of the pictures and discuss their favorite things about each character.

One of the greatest things about the animated series for me, as a mom of a young girl, is that it has such strong female characters. Both heroines and villains are solid, smart, and capable, and there is a lot of emphasis on the importance of family and friends as well as community and education. It’s refreshing to encounter a show that has a power balance in the main characters. While Aang is the Avatar, Katara (the main female character) is a water bender, and she seeks training in her talent as well. There aren’t enough shows out there that have strong, responsible, intelligent female characters who also remember the importance of smiling. This series has several shining examples, while still appealing to a male audience as well.

It was great when reading through the preview book and watching the documentary about the making of the series to discover that the creators thought it was very important for there to be such strong female characters. Though my children thought the idea of watching behind-the-scenes footage and audio commentary was “too boring” (they went upstairs and pretended to be airbenders instead, frightening the cat when they tried to convince him to play Aang’s pet lemur-hybrid, Momo) I thought it was very insightful and rather amusing (watching the production team giggling about the term “shipping” was priceless). It was very cool to get to see how everything came together and get to watch the progression of the characters from initial concept to full fruition, and I was very impressed with the amount of research – especially into different styles of martial arts – was done in the development process. It is no wonder that the series won so many awards (including Emmys and a Peabody) when it was on the air.

My favorite special feature in this collector’s edition was getting to see the original pilot. I enjoyed the commentary, but would have liked to have been able to watch the pilot again without it so that I could hear everything the characters were saying, too, of course.  It was awesome to see earlier visions of the characters that have become such a major inspiration in this household. It was also great to know that the developers were so invested in creating full, rounded characters for the show, as well as in having a balance of action, tender moments, and comedy. One thing I haven’t noticed in trailers for the upcoming Shymalayan film is that element of fun and comedy that reminds a viewer to smile during the animated series. I don’t know if that will be touched on in the film, but I do know that I will always have the DVDs of the animated series to come back to, and that my kids are always up for watching it again.