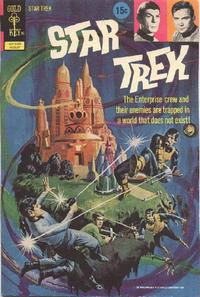 After growing up from the little science-fiction show Gene
Roddenberry created in the 1960s, the venerable Star Trek franchise in recent years had just about worn out its
welcome in the eyes of all but its most devoted followers. Enter J.J. Abrams and
his high-octane, supercharged re-imagining of the classic series, resulting in
one of 2009’s most commercially and critically successful films, released today on DVD and Blu-Ray.

Star Trek’s
unprecedented popularity at the box office has also revitalized interest in
past adventures of Captain Kirk and the crew of the U.S.S. Enterprise. Many such tales have been chronicled in comics form
since the 1960s—while the classic series was still on the air! After
boldly going into our vast archives, we have emerged with six stories that we
consider worthy representatives of the more than four decades of Star Trek comics history.

In order of publication:

Love them or hate them, the Gold Key Star Trek comics occupy a special place in the hearts of old-school
Trekkies. The 61 issues—complete with crazy character likenesses as well
as the Enterprise belching fire from
its warp engines—helped to fuel fans’ needs for new Star Trek stories in the early 1970s. This story features the
Enterprise pulled through a cosmic vortex into a mysterious region where time
has no meaning. There, the crew finds all manner of trapped spacecraft and captive
beings—along with a ship full of angry Klingons! A tale typical of the
Gold Key run, this issue is noteworthy as being an apparent inspiration for
“The Time Trap,” an episode of the animated Star
Trek series produced a year later by Filmation Associates. 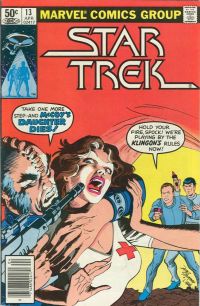 Picking up where Star Trek: The Motion Picture left off, this incarnation of comics tales set aboard theEnterprise was hampered by Marvel’s licensing agreement with Paramount Pictures. Writers and artists were restricted to drawing upon concepts introduced only in the new film rather than being able to mine the rich history of the Star Trek television series for ideas. Despite such limitations, a few references to what has gone before manage to sneak into this run’s eighteen issues. One of them comes in this story when comics readers are introduced to Dr. McCoy’s estranged daughter. Mentioned obliquely in an animated episode, and finally given a face and a name here (“Joanna,” from an early draft of the original series Star Trek episode “The Way to Eden,” in which she ultimately did not appear), Kirk and the crew find her living on a planet which is the object of dispute between the Federation and the Klingons. Joanna finds herself caught in the middle as tensions escalate, with the Klingons determined to claim the planet—at all costs! 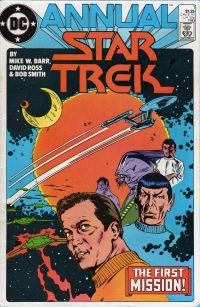 Unlike Marvel, DC Comics was able to secure a licensing agreement from Paramount that permitted them access to the width and breadth of characters and concepts from the Star Trek television series and movies. Beginning with adventures set directly after the events of Star Trek II: The Wrath of Khan, the monthly series wove tales in and around storylines that served to connect the next two films. During the course of DC’s original run of fifty-six issues as well as the publisher’s second series that ran for eighty issues, several stories left the movie timeframe and returned to the era of Captain Kirk’s original five-year mission. This one takes advantage of the annual format’s larger page count to tell Kirk’s first mission as captain of the Enterprise after taking command of the ship from his predecessor, Christopher Pike. A mysterious alien vessel from Pike’s past returns, confronting the former captain over a tragic mistake he made years earlier and compelling Kirk and his crew work to set things right. While there are several print interpretations of this period in Kirk’s career, many fans hold up this story as the one that counts. 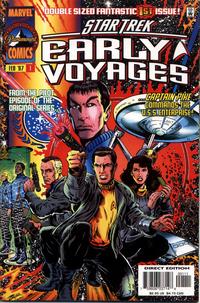 Marvel’s second Star Trek comics license, acquired in the late 1990s, allowed a freedom similar to that enjoyed by Star Trek novel publisher Pocket Books in that it permitted an expansion of the mythos beyond the confines of the television series and films. In addition to monthly titles focusing onStar Trek’s well-known ships and their crews, Marvel also launched titles featuring all-new or at least largely unknown characters. Early Voyages chronicled the missions of the Starship Enterprise with Captain Christopher Pike and his crew as seen in “The Cage,” Star Trek’s unsold first pilot. The series is kicked off in fine fashion with this story, in which Pike is abducted by an alien race that probes his mind, eliciting memories of how he assembled his crew. Each of the characters, some of whom are only glimpsed during the pilot episode, enjoys their moments in the spotlight during the series’ largely enjoyable 17-issue run. Early Voyages is considered by many fans to be a high point of Marvel’s second attempt at Star Trek comics. 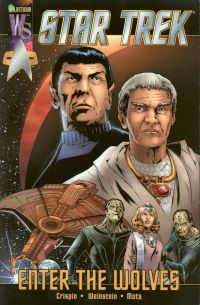 When Wildstorm acquired the Star Trek comics license in 1999, editors abandoned monthly titles in favor of mini-series and one-shot stories. Two writers with longtime Star Trek credentials penned perhaps the most memorable single-issue story of Wildstorm’s run. Ann Crispin, already known to readers thanks to her fan-favorite Star Trek novels Yesterday’s Son and Time for Yesterday, partnered with Howard Weinstein, who at age nineteen sold his script for “The Pirates of Orion” to Filmation for the animated Star Trek series in 1973. Their teamwork yields a compelling tale in which Ambassador Spock is at odds with his father, as the elder Vulcan denounces a request to join the Federation from a newly-encountered alien race, the Cardassians. Trivia for those who read the Pocket Books novels: this story also serves as a follow-up to Crispin’s novel Sarek. 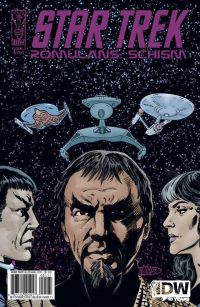 Like Wildstorm before it, IDW has (for the moment, at least) forsaken the notion of a monthly ongoingStar Trek title and instead concentrated on a variety of mini-series set in the eras of the original series and Star Trek: The Next Generation. Among the stronger entries are those written and drawn by comics legend John Byrne, including this story, which is his third to focus on one of Star Trek’s most enduring adversaries: the Romulans. Though this story takes place at the same time as Kirk’s original five-year mission aboard the Enterprise, it focuses on very few known characters. Providing insight into the tenuous alliance between the Romulans and the Klingon Empire—and how that pact affected each government’s political relations with the Federation—Schism offers new perspectives on familiar events from the Star Trek mythos. Already anticipated at this writing is Byrne’s conclusion to this narrative, an adaptation of the classic Star Trek episode “Balance of Terror” as told entirely from the Romulan point of view.

(To be reprinted with Byrne’s other Romulan stories and the “Balance of Terror” adaptation in Star Trek: Romulans 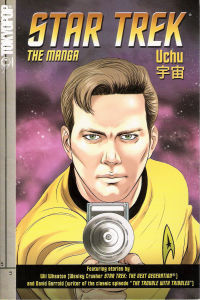 AUTHORS’ NOTE: Had this site been named “Comics Heaven,” well, then our “Heavenly Seven” feature would also have included “Art of War,” published in Uchu, Tokyopop’s third edition of Star Trek: The Manga

from July 2008. In this story, Captain Kirk faces off against a Klingon commander after responding to a distress call from a Federation mining colony planet. The aftermath of that incident results in a court martial for Kirk and a tribunal for the Klingon commander, and markedly different views of justice and conduct in the face of “the enemy.” Written by Star Trek: The Next Generation’s own Wesley Crusher, Wil Wheaton himself, this is a tale told in the finest tradition of the original series. (Gosh, some guys just can’t follow submission guidelines.)

Conjoined twins born 3 years and 1,200 miles apart, Kevin Dilmore and Dayton Ward have actually read all of the Star Trek comics ever created. While an impressive accomplishment as it relates to writing articles about Star Trek comics, it carries less weight (apparently) when trying to pick up girls at bars. When not failing at that, Kevin and Dayton have for more than a decade partnered on the writing of numerous Star Trek novels and short stories for Pocket Books as well as articles for two different Star
Trek magazines. This part of their resumes has also proven quite useless when attempting to woo ladies of the bar-hopping persuasion. Learn more about them at Dayton’s website, http://www.daytonward.com.