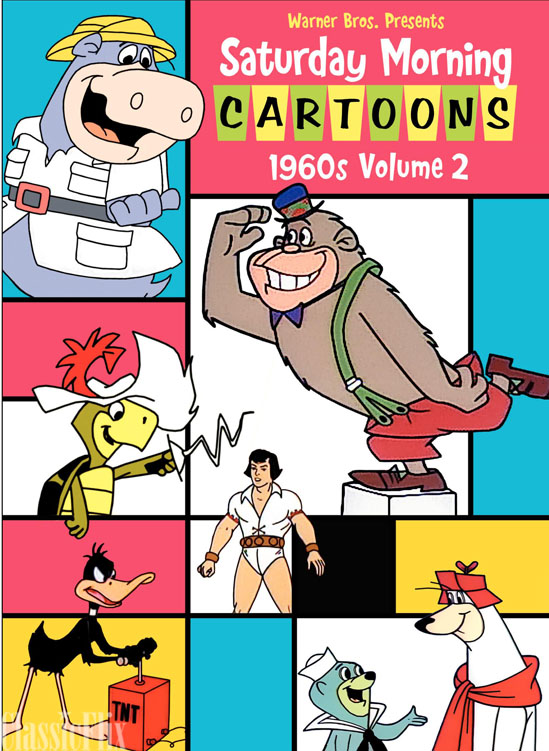 With three networks programming cartoons from 8 a.m. until just about noon throughout the 1960s, there was a rich variety of characters, situations, and styles. While Hanna-Barbera pretty much owned the first half of the decade, Filmation and others arrived and brought some different looks.

, coming out Tuesday from Warner Home Video. Making return appearances are [[[The Jetsons]]],[[[Magilla Gorilla]]], [[[Atom Ant]]], and the [[[Looney Tunes]]] gang instead of shows yet to be sampled.

New for the second volume, which was sent for review, are [[[The Space Kidettes]]], [[[Samson & Goliath]]], and [[[The Adventures of Gulliver]]]. [[[The Kidettes]]], a show I had forgotten about, ran for a single season, 1966-1967, and featured four adorable tykes living in their space clubhouse (a converted Gemini capsule) and outwitting the nefarious Captain Skyhook. Two cute for words.

Samson may have inadvertently inspired Roy Thomas with  a teen, Samson, gained an enhanced form and super-powers by clanging together his bracelets, saying “I need Samson Power” and transformed into an adult hero. Clanging them a second time turned his trusty dog into a powerful lion, Goliath. No secret identities and lots of fighting evil organizations. The stories are predictable and Samson seems devoid of personality.

The one featurette, Completely Bananas: The Magilla Gorilla Story is short but points out this 1964 series was the end of an era for animal-centric series with H-B’s [[[Jonny Quest]]] about to debut and a move towards more human adventures. And as the super-heroes rapidly burned themselves out after just two seasons, networks sought other stories such as ABC’s The Adventures of Gulliver. The disc provides the pilot episode showing how the boy, Gary Gulliver, and his dog Bib survived a shipwreck and washed ashore on the very “lost” island they sought with Gary’s dad, now presumed missing. While Gary is drawn straight, the Lilliputians are cartoony and comical but a détente is achieved.

The disc also includes fresh installments of Wally Gator, Ricochet Rabbit, Mushmouth and Pumpkin’ Puss and their template, [[[Tom & Jerry]]. And assorted other features far more familiar than the above.

The two-disc set does not feel as fresh and inviting as the first and that could be because the mix isn’t as strong this time or, the nostalgia has worn after since the first volume came out earlier this year. Clearly, this is for the late Baby Boomers hoping to relive those years.

Once again there’s the absurd advisory about the material not suitable for this year’s kids.