Review: ‘Stitches’ by David Small — a comics memoir of an amazingly bad childhood 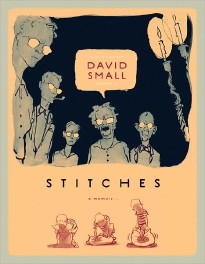 You can’t write a memoir these days unless you had a bad
childhood – call it the Law of Oprah. You have to have some horrible secrets,
either your own or those of your parents/keepers/guardians, that you can
reveal, tearfully, to an enthralled TV audience when called upon. You may not
make it to that TV-show couch, since the competition for a bad-enough childhood
is fierce, but that’s the aim. Memoirs of anything positive are utterly passé –
even a book like Eat Pray Love needs to
start with heartbreak before it can get to happiness.

Then there’s the unrelated but equally unsettling
requirement that only non-fictional graphic novels can be taken really seriously by the outside world. From [[[Maus to Persepolis]]], from [[[Fun Home to Palestine]]], it’s only respectable if it’s real. As far as our mothers and cousins and next-door neighbors know, “graphic novels” means expensive comic-book stories about either superheroes or the author’s tormented relationship with his family.

[[[Stitches]]] is perfectly positioned at the intersection of those two publishing trends: it’s the true story of author David Small’s appalling childhood, told as comics pages with cinematic “camera motions” that will appeal to readers not used to reading comics. Even the art style Small uses in Stitches adds to the seriousness; Small has a sketchy, loose line of variable width here, strong to define the figures and lighter and looser for backgrounds, and washes in various tones of grey. In fact, the whole
book is grey – even the black line looks like just another shade of the murk.

Small was born in 1945 in Detroit, the second son of a
distant, cold, pipe-smoking radiologist father and a vastly colder, depressive,
secretly lesbian housewife mother. Despite having a doctor for a father, the
family seems to have been both generally sickly and to have avoided actual
medical treatments as much as possible. For example, David Small was born with
a sinus condition, and his father – a man with a hammer in his hand who saw
every problem as a nail if ever there was one – gave him massive doses of
X-Rays over several years to cure him.

Stitches follows Small
as he grows up, with major sections set at the ages of six, eleven, and
fourteen. The major linking thread, other than the overall oppressive atmosphere
of his house, is the aftermath of those radiological treatments. Small didn’t
know it at the time, but his father gave him cancer of the throat, which
eventually led to a dangerous surgery at the age of eleven – one which saw
Small’s mother give him the closest thing to caring he ever saw, which he later
realized was because she expected him to die. It also saw his voice disappear
entirely for several years, along with one of his two vocal chords; Small has apparently
re-learned to speak in the long years since then, but it wasn’t quick or easy.

Small presents all of these events as he experienced them at
the time: from a child’s perspective, and knowing only what he knew then. He
realized that his family wasn’t healthy at a young age, but Small’s narration
doesn’t talk about this directly, in the way that a fish never talks about
water or that rope is a taboo subject in the house of the hanged man. Stitches alternates between heavily narrated sections, in
which Small explains what we’re seeing, and what he thought about it as a boy,
with the more cinematic segments, generally silent.

Small’s childhood was horrible, and his parents and other
elders – as he depicts them here – were uniformly rotten to a boy who needed
love and affection (and not massive numbers of roentgens). But Stitches places strong scenes side by side, like bricks on the
ground, instead of mortaring them together to connect into a single strong
story. Stitches feels like a book
of short stories at times, as threads are picked up, important for a dozen or
two pages, and then drop away again. There is a lot of powerful storytelling,
and a powerful story to tell, in Stitches’s dark, moody pages, but it doesn’t, in the end, become one single story, but remains a collection of dark tales from a
bad childhood, suitable for turning into comics that your cousin might read or
for a segment or two on one of the couches of daytime television.