Review: ‘The Next Doctor’ on DVD 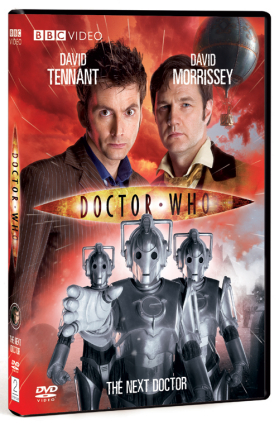 The [[[Doctor Who]]] Christmas Specials have normally been delightful affairs, bridging the events of one season with teases for the forthcoming season. This time, though, The Next Doctor

actually kicks off a season of four specials featuring the last time David Tennant will command the TARDIS as the doctor as he makes way for young Matthew Smith in 2010.

When the special aired last December, there was intense speculation whether David Morrissey was actually being introduced early as the replacement. It certainly felt that way as we learned the villains would be the Cybermen and that Velile Tshabalala had been added as Morrissey’s companion, a woman named Rosita, which more than echoes the now gone Rose Tyler.

Clearly, that was not the case and was an interesting premise with so-so execution. In short, while visiting London on Christmas Eve, 1851, the Doctor comes up against a new threat but also a man acting, sounding and even looking like he might be, well, the Doctor. He spoke of the TARDIS and proclaimed to possess a sonic screwdriver but as the men began investigating together, the real Doctor figured out how a poor, mentally stressed man was led to believe he was a Gallifreyan Time Lord.

Along the way, the two have to learn the secrets of the Cybermen’s scheme and then foil it, clearly doing so before St. Nick arrives to dole out gifts to one and all.

The first half of Russell T. Davies’ script is nicely paced by director Andy Goddard and sets things up well but the second half is lots of running, chasing, fighting and noise-making without making an awful lot of sense. The escapade is being released on DVD this Tuesday from BBC Video, oddly timed considering the following special is already available and it’s a wee bit early for the holiday season. Regardless, the story reveals to us that the poor man was accidentally imprinted with details about the Doctor that had been prepared for the Cybermen. As a result, its weeks before he realizes that his family is dead save his young son who must be found and rescued.

Morrissey does a good job as Jackson Lake, adding some nice pathos to the part. He and Tennant also play nicely off one another but Tshabalala has precious little to do and Dervla Kirwan as the villainous Miss Hartigan is a one-dimensional serial villain.

There’s a lot of stuff and nonsense and in the end, the character arcs are truncated in favor of the shouting and jumping around as if everyone discovered they were short on time to properly finish the story. As a result, it’s a good but far from spectacular effort. Being one of the final Tennant episodes, it’s a wasted opportunity.

The delight of the disc, though, is the special feature, the [[[Prom 13: Doctor Who Prom]]] concert that was performed in England on July 27 of last year but aired only in January. The hour-long concert, specifically designed to entice children to the orchestral experience, shone a nice spotlight on Murray Gold, the composer of Doctor Who music since the series’ revival in 2005. Hosted by Freema Agyeman with a cameo from Catherine Tate, the performance included many of the aliens and menaces from the series, walking through the audience and interacting with them. There was also a seven minute “Music of the Spheres” video presentation featuring Tennant aboard the TARDIS which discussed the importance of music. The storyline involved interaction with the orchestra such as the Doctor tossing his sheet music into the air and having it land in the hands of the performers.

Definitely not the way to introduce newcomers to the Doctor but certainly worth having by the diehard fans.